The awards just keep rolling in as Hansen Pole Buildings has been named the Best Agricultural Building Supply Company in the Midwest USA by Build-News! Now we would like to believe we do a pretty fair job at providing “The Ultimate Post Frame Building Experience™” to our clients, so it is even more gratifying to be recognized as such by the construction industry.

Whilst Hansen Pole Buildings provides a plethora of buildings for various uses – from residential to commercial, industrial to storage, the roots of our industry lie in the agricultural market.

Now agriculture comes in many shapes and sizes, especially here in the bread basket of America.

Last Saturday I was riding my motorcycle in a charity poker run, through miles upon miles of field of corn and soy beans. Each of these crops is grown on over four million acres of land here in South Dakota! And, in both cases, our state does not even rank in the top five producing states! Where South Dakota does rank Number One is in the production of alfalfa, sunflowers and hay. We are also in the top five for flaxseed and oats. 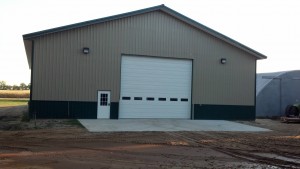 All of these crops require machinery – with an average machinery value of $250 an acre. The risks and costs of mechanical breakdowns are huge, and can be reduced by the investment in farm buildings large enough to get expensive equipment out of inclement weather. Not only is this a practical solution from a storage standpoint, but also for being able to do regular service and maintenance.

South Dakota is also a major player in livestock industries – bison, cattle, sheep and hogs put our state in the top ten for each of these.  Each of these has their own unique needs for post frame buildings.

And, even though it is currently not legal in our state, South Dakota’s Number Nine cash crop (according to www.norml.org) is marijuana! The great majority of which is grown in pole barns. While we do not condone illegal activity, as laws from state to state are gradually changing, it may behoove those of you who are interested in expanding into this field to do some advanced research: https://www.hansenpolebuildings.com/2016/03/marijuana-grow-barns/.

Regardless of what you are farming, if a post frame building is part of your future plans, we are here to help get the most value out of your building investment.

You Can Lead a Horse to Water…Pole Building Garage

Several years ago, when Hansen Pole Buildings was a fledgling company, I worked with a client in Goldendale, Washington assisting him in designing what (in his eyes) would be his ideal dream building.

My mission has always been to deliver the “Ultimate Post Frame Building Experience™”, which is greatly helped by clients who are open minded and willing to listen to why their idea might not be the most practical. 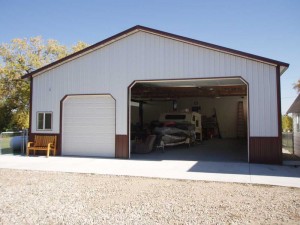 This particular client needed a four car garage – simple enough sounding. In his mind the building would be 36 feet wide and 48 feet long, certainly plenty large enough to park four vehicles in.

However it was HOW he wanted to park the four vehicles which posed a challenge!

His idea was to have two overhead doors, which would be 16 feet wide. Two cars can and will fit through a 16 foot wide overhead door, provided one is careful.

In this particular case – the client wanted to place the two overhead doors side-by-side on the same 36 foot endwall.

I explained why this might prove to be a challenge, drive in car number one on the far right, park and exit the driver’s side door. Repeat with cars number two and three, moving progressively to the right with each car.

Now, drive car number four in and hope there is a sunroof, as there is no room left to swing the driver’s side door open without hitting the wall!

I also tried to express how important having ‘wall room’ is – as a place to hang things on, or lean things against. If your garage is anything like mine, every available inch of wall gets used!

Well, I did make a noble effort, however my pleadings feel upon deaf ears.

The client wanted his building, his way.

About a year after the client had completed the assembly of his building kit, I got a call from him. He loves his new building and confessed I was absolutely correct in both of the things I cautioned him about.

In reality, he would have ended up a far happier camper with a building 40 to even 45 feet in width. This would have allowed him to comfortably park his four cars, be able to swing open doors without door dings and have given him the wall space for stuff!

One of my favorite sayings goes like this…” You can lead a horse to water… but you can’t make him drink.”

Sales and marketing….to some the thought of at least one of these is absolutely chilling.

There, I said it. It amazes even me how challenging it can be to get clients to engage with our Building Designers.

I realize it is frightening to think – your problems might be solved or goals able to be attained by investing in a product which you both want and need – a new post frame (pole) building.

I am fairly politically incorrect, so I am keeping this simple, here are the FIVE THINGS which must be present before you will make a commitment to move forward.

Luckily our post frame building kits packages deal with something which involves one or both of the following: a) Pain and great inconvenience, loss of money, threat of loss, and/or b) some craving for pleasure which borders on the irrational.

For most folks, a pole barn is the solution to Door “A”. Getting tired of – one or more of: your spouse nagging, things getting stolen or ruined due to weather, theft or vandalism (you are getting the drift). “B” would be my sudden craving for the ultimate man cave!

If you’re not in a hurry, you’re not writing the check today. Some clients lack a sense of time. Don’t want to scrape frost this winter? Then get moving NOW, or the same pain you experienced last winter, will be there this winter.

But they aren’t the benefit to you, the building owner.

For the non-marketers amongst my readers, a unique selling proposition (USP) is our unique answer to these questions:

“We give you back your sanity, by helping you protect your valuable possessions in your own professionally designed custom building, with a 100% satisfaction guarantee and the industry’s only limited lifetime structural warranty.”

We look forward to discussing your building needs.

This entry was posted in Pole Building Comparisons, Pole Barn Planning and tagged the ultimate post frame experience on June 1, 2016 by admin.
1.866.200.9657