Home >> Pole Barn Questions >> Concrete Footing: How Thick Should it Be?

Concrete Footing: How Thick Should it Be?

Alan was a post frame building contractor for years, prior to becoming a Building Designer for Hansen Pole Buildings. If I had to estimate, I’d venture Alan constructed well over 200 of our buildings.

Recently, Alan had a client question the thickness of the concrete footings, beneath the columns, used to support the pressure preservative treated columns. It seems Alan’s client had engaged a local engineer to do the site design and she had put some ideas in client’s mind of our footings being inadequate.

15,000 buildings – I suppose I was due for the first client to question this one! 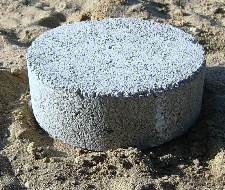 Throughout the industry, a nominal six inch thickness of concrete (actual thickness is 5-1/2 inches) poured beneath columns is pretty well accepted as being adequate. Many individual Building Departments provide handouts for non-engineered post frame buildings, none of which I have ever seen as providing for a footing of greater than six inches of thickness. Personally, I have never heard a report of a column supporting a post frame building having “punched” through the footing beneath it.

In the case of the engineers for Hansen Buildings, they are using a design with a full eight inches of concrete under each column – over 45% thicker than would be the common industry standard.

But – is this actually adequate? Good question, so I started doing the Google thing.

From decks.com…”This footing type involves pouring a pad or “cookie” footing at least 12” thick at the bottom of your hole below the frost line.” No basis, in their website, for where this thickness came from.

Fao.org (Food and Agriculture Organization of the United Nations) … “Isolated piers or columns are normally carried on independent concrete footings sometimes called pad foundations with the pier or column bearing on the centre point of the footing. The area of footing is determined by dividing the column load by the safe bearing capacity of the soil. Its shape is usually square and its thickness is governed by the same considerations as for foundation footings. They are made not less than 1 1/2 times the projection of the slab beyond the face of the pier or column or the edge of the baseplate of a steel column. It should in no case be less than 150mm thick. As in the case of strip footings, when a column base is very wide, a reduction in thickness may be effected by reinforcing the concrete.” For those of us who have forgotten everything we were ever taught about the metric system, this would be a minimum of 5.9 inches thick.

Now if this was a stick framed building, a nominal eight inch wide concrete foundation wall will support a two story structure, with a 16 inch wide by eight inch thick continuous footing below.

From ConcreteNetwork.com…. (in reference to footings under framed walls)…”When a footing must be widened to boost bearing ability, it should also be reinforced or deepened. An unreinforced footing that is too wide may crack close to the wall, overloading the soil beneath. Without reinforcement, codes say the thickness of the footing should be at least as great as the distance it projects next to the wall.

If you increase the footing width, the code requires an increased thickness as well. That’s because a footing that’s too wide and not thick enough will experience a bending force that could crack the concrete. The projection of the footing on either side of the wall is supposed to be no greater than the depth of the footing. So, for example, a 32-inch-wide footing under an 8-inch wall would need to be at least 12 inches thick. Instead, however, you could rein-force the footing with transverse steel (running in the crosswise direction, not along the footing). In most residential situations, #4 rod at 12 inches o.c. will be plenty for 8-inch-thick footings up to 4 feet wide. The steel should be placed about 3 inches up from the bottom of the footing.”

If the same was to be held true for a post frame building, the maximum diameter of an eight inch thick concrete pad, under a nominal six inch square column (5-1/2” square actual), would be 21.5 inches, without adding rebar.

At jjgarcia.com/webengineer/footing.html, an Individual ‘Pad Footing” Table is provided. Most jurisdictions accept a design maximum soil bearing pressure of 2000 psf (pounds per square foot). From the table using 3000 psi (pounds per square inch strength concrete) a ten inch thick footing (this happens to be the minimum footing thickness in the table) and three feet square with four Number three (3/8” diameter) rebars will support 17,000 pounds of load. This load is roughly the equivalent of a 60’ clearspan pole barn, with columns spaced every 12 feet and a roof load well in excess of 40 psf! For most post frame buildings, this would be a bit on the overkill side.

The same site’s recommendation for rebar placement: “The placing of the rebars are to be a minimum of 3 inches from the dirt on the bottom of the Pad Footing and 3 inches clear of the side dirt walls. The bars are placed in a checker board pattern and tie together with bailing wire at the points where they intersect. The spacing between each rebar should be equal.”

If all of this information left my readers as confused as it left me – then we are sailing on the same ship. For now – I’ll leave it in the good hands of our engineers.  They have the knowledge and experience from successfully designing thousands of post frame buildings.

29 thoughts on “Concrete Footing: How Thick Should it Be?”