I recently read this in an online forum and felt compelled to share (misspellings uncorrected from original posts): 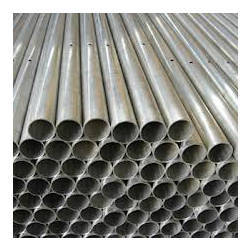 “Anybody seen this done before? Have more pipe than money. I like the idea of steel poles for longevity, but not sure if they are rigid enough. Planning on 8′ spacing on the poles. 16′ walls. 20′ pole, 4 feet deep in concrete. Wood trusses, wood perlons.

Would a big wind move this building?”

Before reading any of the responses from others to his question….I had lots of thoughts pop into my head. To begin with, the poster is from Southeast Montana, where the minimum design roof snow load is 30 psf (pounds per square foot) and the design wind speed is no less than 90 mph (miles per hour). Unless this structure is somewhere in Southeast Montana I am unfamiliar with, it will have an Exposure C for wind (basically – nothing to stop direct wind exposure in one or more directions).

I could see one or more of the following happening: pipes buckling due to snow load, pipes bending over due to wind loads, pipes rusting off at the ground, trusses inadequately connected to the pipes being blown off the building.

Safe and sane pole building structural design is based upon providing the most cost effective structures, using the least costly materials. Not only are our engineers always looking for better, faster, stronger and more efficient methods, but so are scores of other engineers all over the country. If oil pipe was indeed a better design solution – it would be used in pole buildings everywhere. The reality is… I’ve yet to see an engineer put his seal on a pole building using oil pipe for poles. This alone is an immediate red flag.

Now a few words of wisdom from the other posters on the same thread:

“Compressive strength would be fine, but, I wonder about buckling. Truss it with two a foot apart and zigzag some rebar between em would do it.”

Welding rebar between pipes, is not going to solve anything. It is so small in diameter; it will buckle under a compressive load. And placing trusses every two feet, just means structural headers (aka truss carriers) need to be added between the pipes to support the trusses. More connections, more potential for a bad one, and a failure.

Here, at least, is a poster with some common sense. Chances are very good the wood columns will need to be larger than 6×6, but the point is well made.

“Build the whole thing out of pipe, rafters to, lots of them in the southern oil states, if you’re a better welder than carpenter might be cheaper”

Sure, let’s go from bad to worse. Cheap doesn’t matter, when it falls down and either kills someone, or destroys valuable animals or equipment.

And one more helpful responder:

“With enough bracing it should work fine. By putting an X brace in between the poles (even cable works well, under tension) you can take the front to back (parallel to the ridgeline) sway out. Hard part is the side to side sway if you have a clear span building. It is going to be pretty hard to brace that properly without taking out much of the usable space inside the building. Almost going to need a brace running from ground level on one side to the top on the other.”

With enough bracing, I know engineers who could probably make a building stand up using pixie sticks for poles – the suggested X braces running across the width of the building, could make it a little tough to use.

The last post is from the person who asked the original question:

“I’m kind of wanting to somebody to tell me it’s plenty stout, but I might just have to chance it.”

Why spend tens of thousands of dollars, on an unproven, non-engineered building, just to leave it to chance?

Ever Wonder What a Post Frame Engineer Does? Part ...
I have been pooh-poohed on occasion for my insiste...
Hurl Your…Concrete Cookies
I know none of us has ever experienced this condit...
Powerlifting in Pole Barns
Power Lifting Pole Barns They might seem like t...