How Deep Should Pole Barn Holes Be?

Welcome to Ask the Pole Barn Guru – where you can ask questions about building topics, with answers posted on Mondays.  With many questions to answer, please be patient to watch for yours to come up on a future Monday segment.  If you want a quick answer, please be sure to answer with a “reply-able” email address. 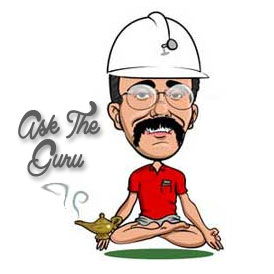 DEAR POLE BARN GURU: I am concerned that my plans might not have my pole barn holes going deep enough. The person I have hired to drill the holes for me has had a couple bad experiences with ‘frost heaves’ in our area, specifically when he didn’t go at least 4 feet down. My plans call for a 42″ depth for the pole barn holes, and the post going down only 34″. I would like to go down as far as possible with my posts, but obviously don’t want to be short on the top. Can you please take a look at my plans, and tell me what my maximum post depth would be? Thank you. JOE IN TAYLORS FALLS

DEAR JOE: Frost heaving is certainly a valid concern in areas of the country where deep freezing can be an issue. The requirements for frost depth are one of the items we have every client address, when they have their Building Code and load information verified by their Building Department prior to ordering their new Hansen Pole Building kit package.

I’ve written extensively on frost heave, as well as what to do, or not to do here: https://www.hansenpolebuildings.com/2013/11/frost-heave/

For your state, Minnesota, the Minnesota Department of Labor and Industry has available a frost depth map: https://www.dli.mn.gov/ccld/pdf/bc_map_frost_depth.pdf

In your particular case, with a perfectly level site, you could have the pole barn holes as deep as 56″, which places the bottom of the columns at 48″ below grade. The key word being “perfectly level”. It is acceptable to dig the holes deeper yet, and increasing the depth of concrete below the column.

DEAR POLE BARN GURU: I have a pole barn built in 1971 by Moriarty. My FRP Skylight has deteriorated and rotted off do I have any options other than replacing the whole roof, no one seems to be able to match the rib pattern.

Thank you GARY IN RIDGEVILLE

Over the years there has been a consolidation of steel roofing and siding profiles, to the benefit of all involved except those who have older buildings with more unique rib patterns (like yours may very well be). Skylights (whether FRP or Polycarbonate) should really be avoided in the roof plane as they are not designed to withstand horizontal wind loads.

Some choices (other than entirely replacing the roof) – replace the areas of FRP with new steel panels which have the same net width coverage. Obviously the colors will not match, so you may consider using an entirely different color as an accent panel. Or, send us photos and measurements which will clearly delineate all dimensions. While we cannot recommend this as a structural solution, if our polycarbonate manufacturer can match it – it does afford a solution.

My husband and I are considering on building a pole barn house. The one question we currently have is: How would the house stand up to our Canadian weather? We live in Saskatchewan where the weather can drop to -55c in the winter. Thanks TRINITY IN TISDALE

DEAR TRINITY: Good for you and your husband for considering a pole barn house. Regardless of whether your weather is extreme cold or heat, post frame (pole) building construction can prove to be very energy efficient. Roof systems can be created to allow for R-60 or greater insulation depths and wall cavities can be designed to meet any desired insulation thickness.

In most cases wall and roof systems can be designed to minimize thermal bridging. 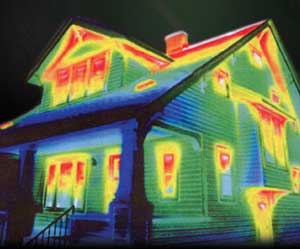 The National Frame Building Association (NFBA) commissioned a report, which was produced in May 2010, to illustrate point of heat transfer in different types of buildings using thermographic images. Both builders and registered design professionals (architects and engineers) familiar with post frame buildings know these buildings use fewer structural components to create an exceptionally economical, energy efficient and environmentally friendly building. With fewer required structural members, wide spaces are created between wall columns, with fewer breaks in insulation.  As well, wood has natural insulating properties compared to steel or masonry structural components.

Post frame has been believed to reduce some of the heat transfer observed in other construction methods, due to wider insulation cavities and less thermal bridging. To confirm these concepts, thermal images which provided visual examples of heat transfer were captured. These images highlight inefficiencies which may be caused by the thermal bridging effects of nonwood structural components, compressed insulation and interruptions in contiguous insulation.  The authors felt some of the examples could be improved with additional measures, which would further distinguish their construction costs compared to those for post frame.

Surface temperature variations which appear using thermography of building envelopes can be due to variations in the thermal conductivity (or thermal resistance) of materials, and/or air movement (and hence heat transfer by convection). Other sources of variation include reflective and wet surfaces. Air movement through a thermal envelope is known as air infiltration when air moves from outside to inside, or air exfiltration when air moves from inside to outside.

Air infiltration points appeared to occur at electrical and plumbing penetrations, which can be resolved with minor measures taken prior to construction completion.

The all steel building had R-19 fiberglass insulation in the roof and walls and no foundation insulation. The building was found to have major air leakage points, enough so it was impossible to depressurize it to determine air infiltration points.

The masonry building measured had untreated concrete block walls, other than an office portion furred in with 2×2 lumber and insulated with R-5.8 fiberglass batts. Ceilings had R-19 fiberglass batts, with no perimeter foundation insulation.

The studwall building was a restaurant with 4,125 square feet of conditioned space. Insulation was R-11 fiberglass wall batts and R-38 cellulose in ceilings. The foundation perimeter was non-insulated. This building was relatively “leaky” from an air infiltration standpoint, with measureable air infiltration at the bottom and top wall plates, as well as at penetrations.

Lower surface temperatures were seen at the wall studs, where the heat loss through framing (depending upon size and spacing of the studs) can vary from 33 to 49 percent of the total.

This study underscored the importance of sealing cracks or spaces between framing materials in a buildings thermal envelope and showed both the measurable difference a small amount of insulation can make and the impact of compressing fiberglass insulation.

Finally, this study showed a uniformly insulated thermal envelope is readily achievable with post-frame construction. There are fewer breaks in insulation where bridging may occur compared to stud-framed structures. Wood structural components do not conduct heat as readily as steel or masonry structural components. Wood posts and heavy trusses used for post-frame require fewer structural materials to be installed, so fewer materials are required. The primary building materials are renewable wood structural components and recyclable steel or other types of cladding. Thermography helps illustrate where thermal bridging may occur. Given these factors and the comparatively low cost of post-frame buildings, post-frame construction may be among the most cost-effective ways to build for sustainability and energy efficiency.