Note that for the purposes of this blog, my comments are heretofore in bold.

I have no issues at all with a Reflective Radiant Barrier, as long as it is sold for what it is, and not wrongly represented. In pole building construction, reflective radiant barriers provides an excellent condensation control, having a very low perm rating, as well as a thermal break created by the air cells sandwiched between the exterior surfaces.

Here are some excerpts from Martin’s article:

Foil-faced bubble wrap is a thin product that comes in a roll.

Its R-value is dismally low. 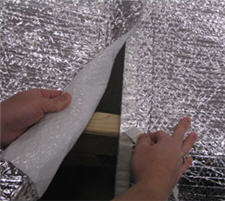 Most brands of foil-faced bubble wrap are only 3/8 inch thick or less, and have an R-value of only 1.0 or 1.1. Since the product often costs more per square foot than 1-inch thick rigid foam rated at R-5, why would anyone use bubble wrap as insulation?

The R-value of foil-faced bubble wrap is so low that it has few, if any, advantages over rigid foam. Of course, the product’s foil facing can be used as a radiant barrier — but if you want a radiant barrier, cheaper products are available. (The bubble wrap layer is unnecessary, since it adds cost to the material without adding any useful thermal performance.)

Now (in my humble opinion) Martin apparently does not know much (if anything) about how pole buildings are constructed. When rigid foam is placed between roof purlins and roof steel, the inch or more of thickness of the rigid foam boards creates an area where screw fasteners from the steel roofing can bend, I would not count on the ability of a roof system so constructed to have anything other than minimal diaphragm values.

Since the main benefit from foil-faced bubble wrap is due to its radiant-barrier facing, the product is basically worthless unless it faces an air space. A decade ago, when I was the editor of Energy Design Update, I noticed that many manufacturers of foil-faced bubble wrap were promoting their products for use under concrete slabs on grade. In this application, the shiny foil is clearly not facing an air space, so the exaggerated R-value claims made by bubble-wrap manufacturers were particularly outrageous. My article exposing the bubble-wrap scammers appeared in the September 2003 issue of EDU.

In that article, I reported that one manufacturer, WE International, made absurd claims about a thin (5/16-inch) product called Concrete Barrier rFoil. The manufacturer’s website boasted, “Concrete Barrier can serve three purposes underneath concrete: R-10 insulation, a vapor barrier and a radon barrier. … How does it compare to 2-inch foam board? It works just as well.”

Similarly, Insulation Solutions, the manufacturer of a 3/8-inch thick product called Insul-Tarp, claimed that the flexible tarp has an “R-value equivalent” rating of R-5 to R-10.

After these lies were publicized, three manufacturers wrote letters to EDU apologizing for the “oversights” and “typographical errors” that appeared on their websites.

Blurring the line between product R-values and assembly R-values

Many of the manufacturers and distributors that publish exaggerated R-values deliberately blur the bright legal line that separates product R-values from assembly R-values.

According to federal law, the R-value of an insulation product — for example, a piece of 1-inch thick polyisocyanurate — is the R-value of the insulation alone. That’s the R-value which insulation manufacturers are required to report on their packaging and in their advertising; the requirement is spelled out in the Federal R-Value Rule, a law that applies to manufacturers, retailers, and builders.

Here’s the key point: polyiso manufacturers can’t claim the R-value of an air space in their labeling or advertising (unless the advertising makes a very clear distinction between the product R-value and the R-value of a hypothetical building assembly).

Fortunately, most (but not all) manufacturers of foil-faced bubble wrap have removed the blatant lies from their websites. Instead, manufacturers tempt the unwary with vague promises; for example, they claim that their bubble wrap “has a high R-value” or that it “resists the transfer of heat.”

The scoff-law websites with the greatest number of lies about foil-faced bubble wrap are those maintained by distributors — including a few large corporations like Home Depot, Ace Hardware, and Amazon — rather than those maintained by manufacturers.

For example, Amazon claims that a type of foil-faced bubble wrap product manufactured by EcoFoil (“HVAC Duct Wrap Insulation”) has an R-value of R-8. But a careful reading of the manufacturer’s technical data sheet and the referenced ICC-ES Evaluation Report reveals that the R-8 value claim is based on an assembly that includes the R-value of a 2-inch air space.

Similarly, Ace Hardware is advertising Reflectix, an R-1 foil-faced bubble wrap product, with a blurb that claims that the product has “R-values ranging from R-3.7 to R-21.”

(Your author happened to check at AceHardware.com and I can confirm Martin’s findings.)

That’s a little like Starbucks saying that a cup of coffee is a satisfying meal — as long as you remember to accompany the coffee with a 12-inch submarine sandwich (not included).

Although the major manufacturers of foil-faced bubble wrap have (almost) cleaned up their act, some still include exaggerations on their websites.

One manufacturer that trumpets exaggerated R-values is EcoFoil (a.k.a. rFoil, a.k.a. Covertech Fabricating). The EcoFoil website describes the company’s duct wrap as an R-8 product, even though the R-8 claim is based on an assembly that includes an adjacent air space.

Considering the Use of a Reflective Radiant Barrier?

If so, invest in it for the things it DOES do well.

When installed with the reflective aluminum side facing outward, it does reduce heat gain from radiant energy.

When overlaps are properly sealed (rolls featuring a tab with adhesive under a pull strip work well for this), it can be an excellent condensation control.

If looking for R-value, consider the assembly. When an adjacent dead air space can be effectively placed in relationship to the location of the reflective radiant barrier, increased R-values can be created.

Another bad apple is Insulation4less, which retails a thin product called Prodex Total. On its website, the company states, “Prodex Total has a nominal thickness of 5 mm (13/64 inch) closed cell polyethylene foam covered on both sides with .0012 (00.03 mm) aluminum foil facing. … R-value R-16 unaffected by humidity.”

Prodex may be unaffected by humidity — but it is seriously affected by gross exaggeration.

These are not examples of victimless crimes; there are victims. One victim is a blogger reports using this sub-slab assembly: “In basement, install Insul-Tarp over crushed rock, single layer of wire mesh, and Wirsbro [hydronic] tubing, pour concrete (pump hose will go through stairwell hole).”

Unfortunately, Insul-Tarp has an R-value of R-2 or less. For years, however, the manufacturer of Insul-Tarp claimed that the product was rated at R-7 or more. The blogger who specified Insul-Tarp believed the false claims, which is why he wrote, “This is what the Insul-Tarp looks like. The exterior is some kind of tough fabric, then there are two layers of thin white foam, then a layer of bubble wrap. Hard to believe this can be equivalent of 2 inches of Styrofoam.”

For the most part, I found Martin’s article to be educational, and as stated, you just have to read the fine print and use products appropriately.