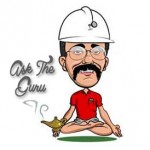 “Hello, I have this question I would like to pass along to the “pole barn Guru” to be answered, I doubt I will get the answer I need in the time frame, but I think its going to come up more often, so  I am guessing now is a good time to ask.

With the idea of burying a 6x6x14 into concrete, the risk of Rot is very high. At a cost of about 50$ per post,  you want to protect your investment,  so many people are using a 6x6x10 and using the Study-wall brackets, but that drives up the cost to about 80$

So my question is, has anyone looked into using the new polyurethane instead of concrete?

Hopefully this response will prove to be timely in regards to your project.

Let us begin with a discussing to overcome a fear of a “risk of rot is very high”. Actual field studies have proven an ability of properly pressure treated lumber to withstand decaying forces for greater than human lifespans: https://www.hansenpolebuildings.com/2017/12/will-poles-rot-off/. Trick, of course, is finding properly pressure preservative treated timbers. Five years ago I penned this article for a post frame industry magazine: https://www.hansenpolebuildings.com/2014/05/building-code-3/. Little has changed since then – lumber dealers and big box stores continue to sell pressure treated timbers without advising consumers as to what those timbers can actually be used for.

Now let’s discuss using high density polyurethane foam for setting columns, rather than concrete. At this year’s National Frame Building Association Expo there were several vendors promoting using their high density foam for setting posts – all of them having experience only from setting of utility poles. Utility poles carry a minimal downward load, so their holes are barely larger than column diameters, making calling for a pre-mix concrete truck impractical. Lateral loads on utility poles are also minimal as compared to columns in a post frame building, so a little high density foam easily provides a solution (and sets up quickly – allowing crews to move expediently from pole to pole).

Here is some more reading on this subject: https://www.hansenpolebuildings.com/2014/02/high-density-foam/. 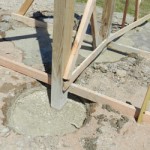 Besides not being Code conforming, there is an issue of cost. Your suggested product provided at The Home Depot will provide a volume equal to five 80 pound bags of concrete (or 1/10th of a yard) for $37.63 or $376.30 per yard. With pre-mix concrete prices being roughly $100 a yard, concrete being Code conforming and not contributing to decay any more than would high density foam, it seems to me to be a no brainer. 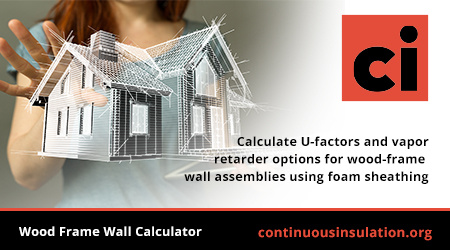 Hansen Pole Buildings’ Designer Rachel recently had an interesting discussion with a client. The gist of the discussion was the client had heard spray foam insulation will corrode the steel and void the warranty of the steel.

Rachel did some research and found this article: https://www.greenhomeguide.com/askapro/question/can-i-apply-spray-foam-insulation-directly-to-the-underside-of-a-metal-roof.

When I added the external elevator shaft to the rear of our steel covered post frame home, my choice of insulation was closed cell spray foam. Although I knew it was going to be more expensive than other choices of insulation, I was (and remain) convinced of it being a superior R-value, as well as completely sealing the system. In the case of our addition, the steel roofing was applied directly over the wood roof purlins, without any solid sheathing or other barrier.

So, will spray foam insulation actually corrode the steel? 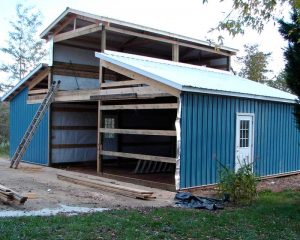 Highly unlikely, as from the research I have been doing there appear to be no chemicals in the spray foam which would react with the steel or the galvanized or galvalume protective layer over the bare material. Most steel roofing is factory finish painted, which adds yet another barrier surface in the interior primer paint coat which further isolates the steel from the spray foam.

There are some cases where I could see some challenges.

One would be if someone went on the cheap and used open cell spray foam, rather than closed cell. In this case moisture could get through the open cells and be in contact with the underside of the roof steel.

The other could occur if there was a leak in the roofing or the ridge cap which would allow moisture to get trapped between the roof steel and closed cell foam.

As to the warranty discussions – steel warranties primarily cover fade and chalking of the exterior finish of the steel. Personally I am hard pressed to see how it is the application of closed cell spray foam insulation on the interior of the steel roofing, would influence the life of coatings on the exterior.

Of course everyone looks for an “out” when it comes to warranties, and the reality is a good warranty protects the seller/manufacturer far more than it protects the consumer.

If I had it to do all over again, I would still closed cell spray foam my own steel roofed building. Check back with me in another thirty or forty years and see if my opinion is yet the same.