Do I Need Any Additional Vapor Barrier?

Do I Need Any Additional Vapor Barrier? 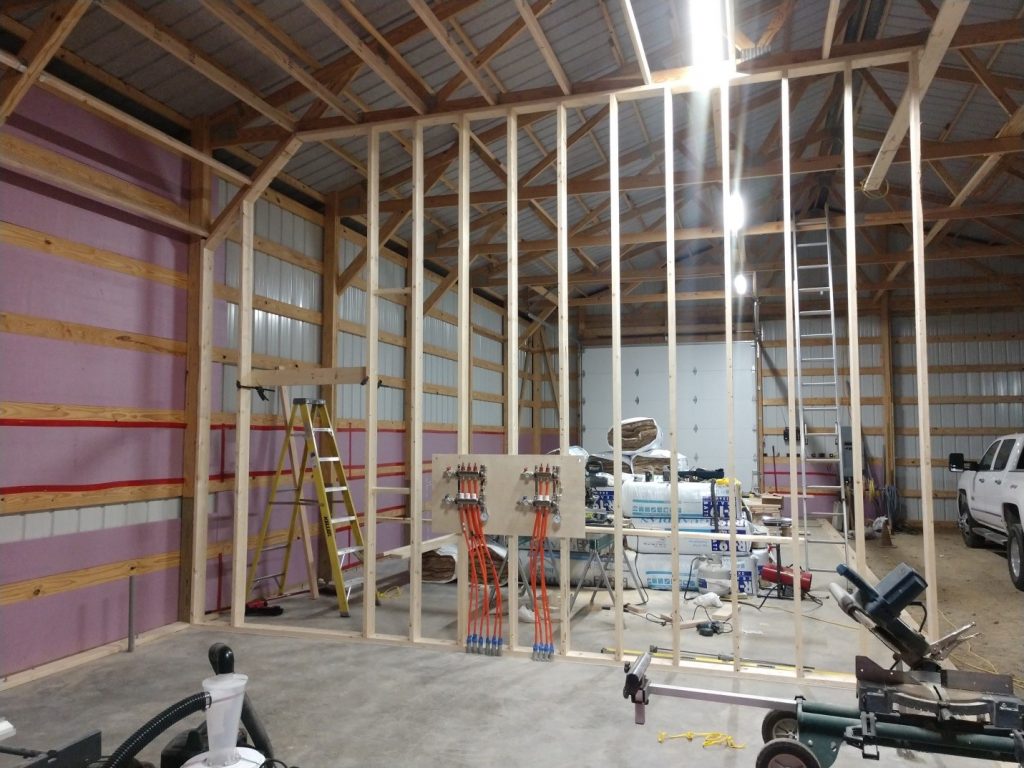 “Have a 40 x 60 pole barn which I have poured a 20 X 60 6″ concrete floor with radiant heat. I have installed 1 1/2″ R 7.5 rigid pink board between the 2 X 6 side boards against the steel. I will be installing R 19 kraft faced insulation in the 2 x 6 side walls and R 38 kraft faced insulation in the ceiling. The area above the ceiling insulation is completely open to the roof.  Eaves soffit is vented. Do I need any additional vapor barrier? Have I done anything wrong?

Some basic commentary, from your photo, to begin with. I obviously do not have the benefit of having your building’s engineered plans or sealed truss drawings to reference, so some of my commentary will be based upon best guesses.

I would sincerely doubt your building’s roof trusses have been designed to support loads induced into them from knee braces. Please read more in regards to this subject here: https://www.hansenpolebuildings.com/2012/01/post-frame-construction-knee-braces/. Your first step should be to contact the truss manufacturer to verify ability of your building’s trusses to withstand loads from knee braces. With an assumption trusses were not so designed, second step will be to contact the engineer who designed your building to find out if your building will still be structurally sound with knee braces removed. If, by some chance, an engineer was not engaged to produce your building plans, a competent one should be retained to do an analysis of your situation.

Any lumber in contact with concrete needs to be pressure preservative treated – this would include plates between columns and bottom plate of your framed stud wall. You really do not want to have these boards decay within finished walls.


If you do not have a well-sealed vapor barrier beneath your concrete slab-on-grade, you need to use a good sealant over top of it.

Moving forward, to your question at hand. In order to install kraft faced batts along your building’s sidewalls, you will need to add additional framing. Most folks place another set of wall girts upon column insides. If so, in your case, then R 19 batts are not going to be adequate – as they will leave an air gap between batts and pink board. My recommendation would be to use BIBs (https://www.hansenpolebuildings.com/2011/11/bibs/) in walls, with a vapor barrier to inside face of framing before adding the finished wall material. To get best thermal performance, a layer of closed cell foam insulation board can be glued to wall framing inside, then glue gypsum wallboard (sheetrock) or your choice of other products to insulation boards. This inner layer of foam board, if joints are sealed, will act as your vapor barrier. Have your building engineer confirm your building walls will be stiff enough to keep drywall joints from cracking.

Now – roof system. Before adding a ceiling, verify your building’s roof trusses will support this added weight. Most post frame building trusses will not! Trusses should have a minimum bottom chord dead load of five psf (pounds per square foot) to support framing and drywall. Your building does not have a vapor barrier between roof purlins and roof steel. Only cure for this now will be to have two or more inches of closed cell foam insulation sprayed to the underside. If you fail to do this, you will have moisture/condensation issues in your attic. You also do not want to have a vapor barrier in your ceiling line – so kraft faced batts are out. I’d recommend 15-20 inches of blown in fiberglass insulation. Make sure to not block air intake from soffits. If your ridge cap isn’t currently vented, it needs to be.

Tom could have avoided a great deal of pain and expense had he and his building provider been communicating in regards to climate controlling this structure. Unfortunately, most post frame building kit suppliers and contractors are focused only upon providing a low price, instead of best design solution for their clients.

I’ve opined upon geothermal heating and cooling for post frame buildings in the past (https://www.hansenpolebuildings.com/2016/12/modern-post-frame-buildings-geothermal/). Reader STEVE in BOYNE CITY had some further questions and writes:

“You said you pump (approx.) 55 degree liquid through pex in ”wells” in the ground (I think is how you put it) through your concrete floor to maintain the slab at that temp. Then you heat the air space above the slab to whatever you want ambient to be. When you said wells did you really mean troughs? More importantly, in hot humid weather, is there a condensation problem on the slab and if so, are ceiling fans used? If the slab is covered with a thin, moderately conductive thermal break like vinyl flooring, how would that affect the temperature moderating effects of the slab? Condensation? Is air conditioning ever needed? PS. I had the idea to do this years ago, and all the older guys in the trades said it was a stupid idea. I am glad you proved it to be a worthy idea.”

When I remodeled what was then my grandparent’s lake cabin outside of Spokane, WA in 1990, I tried to convince my HVAC guy using geothermal wells would be a good idea. Sadly, I let him talk me out of it as I am now (hindsight giving us all 20/20 vision) fully convinced the investment into drilling the wells would have been recouped many times over.

Outdoor temperatures fluctuate with the changing seasons but underground temperatures don’t change as dramatically, thanks to the insulating properties of the earth. Four to six feet below ground (below the frost line), temperatures remain relatively constant year-round. A geothermal system, which typically consists of an indoor handling unit and a buried system of pipes, called an earth loop, and/or a pump to reinjection well, capitalizes on these constant temperatures to provide “free” energy. 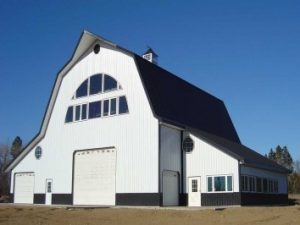 The pipes which make up an earth loop are usually made of polyethylene (PEX) and can be buried under the ground horizontally or vertically, depending on the characteristics of the site. In the case of our 2004 pole building in SD,  the loops are buried vertically, hence wells.

In winter, fluid circulating through the system’s earth loop or well absorbs stored heat from the ground and carries it indoors. The indoor unit compresses the heat to a higher temperature and distributes it throughout the building, as if it were an air conditioner running in reverse. In summer, the geothermal HVAC system pulls heat from the building and carries it through the earth loop/pump to reinjection well, where it deposits the heat into the cooler earth/aquifer.

The airspace above the slab is heated by the compressed heated liquid running through the pex tubes, although in spaces designed to be offices, the bathroom and kitchenette, they are heated by forced air (where heating/cooling is also generated by the same process as heating/cooling for the slab). We live where it can be 100 degrees and 100% humidity in August and have never experienced condensation on the slab. This could be due, in part, to having a well sealed vapor barrier underneath the concrete slab.

Stone, tile, wood and vinyl are fairly good conductors of heat and do not present any special design considerations. Carpeting may require more temperature from below to allow the heat through.