Christina reached out to me on social networking and asked:

“Hello, always look forward to your advice and I ran across something I didn’t find on the Hansen website. AdvanTech flooring as an alternative to OSB or plywood. Thoughts?”

While I have successfully utilized AdvanTech subflooring myself, rather than reinventing a wheel, today’s expert opinion comes from Matt Risinger (you may recognize him from www.buildshownetwork.com).

When I started out in construction, I was working for a production builder. For many years, like most builders of that era, we used OSB (oriented strand board) subfloor — typically a 3/4-inch tongue and groove panel. There was no real choice in OSB then. It was whatever was available from the lumber supplier and we didn’t think a whole lot about it. We used a conventional construction adhesive and nailed off the floor, as that was the fastest method. But we had all kinds of squeaks on the houses we built. I thought that making the transition to screwing down the subfloor would be the answer to my squeak problems, but this didn’t help all that much. We still had frequent callbacks for squeaks. We also had a fair amount of edge swelling — an inevitable result of rain during the framing stage before we got the house dried in. That was a pain, too, because the swelling resulted in a wavy, bumpy floor that contributed to the squeak problems. Floor squeaks are the result of wood movement. Either a nail comes loose, or a screw shears off and you have up-and-down movement, or the edges swell and cause gaps beneath the underlayment that allow for creaks. Frequent callbacks did not do a lot for either the builder’s reputation or for the bottom line.

When I was working for a production builder, I didn’t really have much say in the purchase of materials, so I wasn’t able to change to a different subflooring product. Honestly, at that time, I did not really know there were other options. But when I started building custom homes about 12 years ago, one of the first changes I made was the switch to plywood. It was 1-1/8-inch plywood we should have glued to framing but just nailed it. This provided a nice stiff floor and eliminated my squeak issues. However, on one of my very first houses using plywood, we had a giant downpour during construction when the frame was open. This resulted in a ton of edge swell. Being a custom-built house, I had to fix it by sanding the edges and flattening the floor. The whole time the job was on pause for this to happen, all I could think was “OK, I love that I have eliminated squeaks. I love that I have a stronger, stiffer floor. But, man, this edge swell is a pain.” (And I hadn’t budgeted for the sanding either.)

I was looking for something better, but I thought “OSB? I’ve used that before and had problems. I’m not going back to that!” It was around that time, maybe 10 years ago that someone suggested I try AdvanTech subflooring.

I was soon to learn that there’s a big difference between AdvanTech panels and other subflooring options. Commodity OSB uses glues and a process that permits the panel to soak up moisture. Most subfloor-grade plywood uses similar glues between the laminators. While plywood gives you a more consistent panel, it is still prone to wicking moisture. 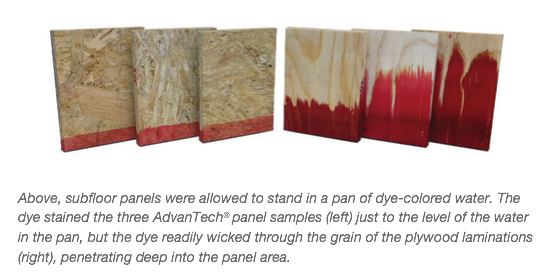 Plywood and OSB manufacturers try to improve this by sealing the panel edges, but the sealant, whether it is a wax or a paint, tends to get scuffed off. Think about how often panels get dragged on their edges across a truck bed or across the floor deck in the process of installing them.

Two things really distinguish how AdvanTech panels are made that contribute to their high performance over commodity OSB: resin technology and manufacturing precision. AdvanTech panels use an advanced liquid resin that coats flakes during the manufacturing process to make sure the panel is thoroughly protected. A lot of engineering and quality control goes into how the strands in AdvanTech panels are oriented and sized within the multiple layers to create a woven matrix of fibers that achieves the right balance of stiffness and dimensional stability. Commodity OSB is also set up in layers but can have larger variations in strand size and orientation within the layers and may use a different kind of resin that does not necessarily have the same moisture resistance. The AdvanTech subflooring manufacturing process also has a high level of precision to make sure the wood strands are the optimal thickness and dimension for a more stable panel. During manufacturing at AdvanTech panel mills, there are extensive quality control checks along the whole panel production process so that only the very best final boards earn the AdvanTech brand mark. 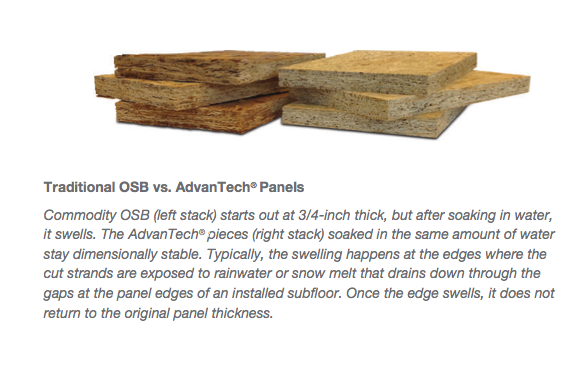 Once I made the switch to AdvanTech subflooring, I had zero edge swell, even with heavy rains during construction.

I’ve not had a single squeak and never had to sand edges down. That has been a huge change for me. I opt for the 1-1/8-inch panel on most of my projects because I want zero bounce in the floor. Certainly, I spend a little more on this subfloor than I have in the past. However, the elimination of problems makes it totally worth it. As with most materials choices, it’s never just about initial cost. Think about it: Not having to pay the unexpected costs of sanding, which interrupts the flow of the project, is one thing. But if I had to fix a squeak after the owners have taken possession and are living in the home, that is a nightmare. My business is based on an expectation of quality. Having no callbacks — having a much stronger, squeak-free floor — has made all the difference in being able to build a solid reputation for high-performing homes.

Having now gained some insight into AdvanTech’s benefits, it does come with some added investment. As compared to OSB subflooring AdvanTech will add roughly 75 to 90 cents per square foot of surface area (comparing nominal ¾” thickness products at current market prices). 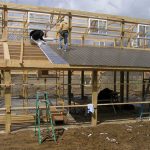 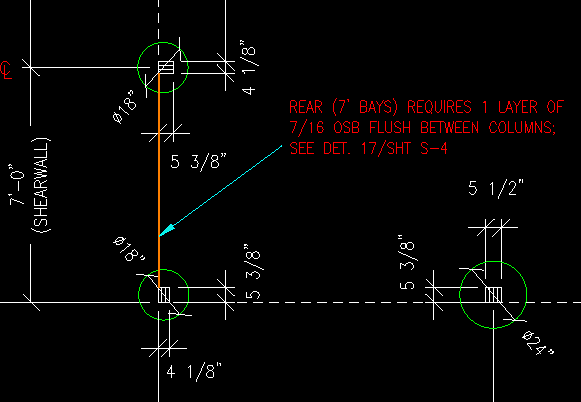