One of my Facebook friends had posted this as a timeline photo as it brought back to her fond memories of a childhood spent frolicking in hay lofts. It was so bad, I just had to save it. 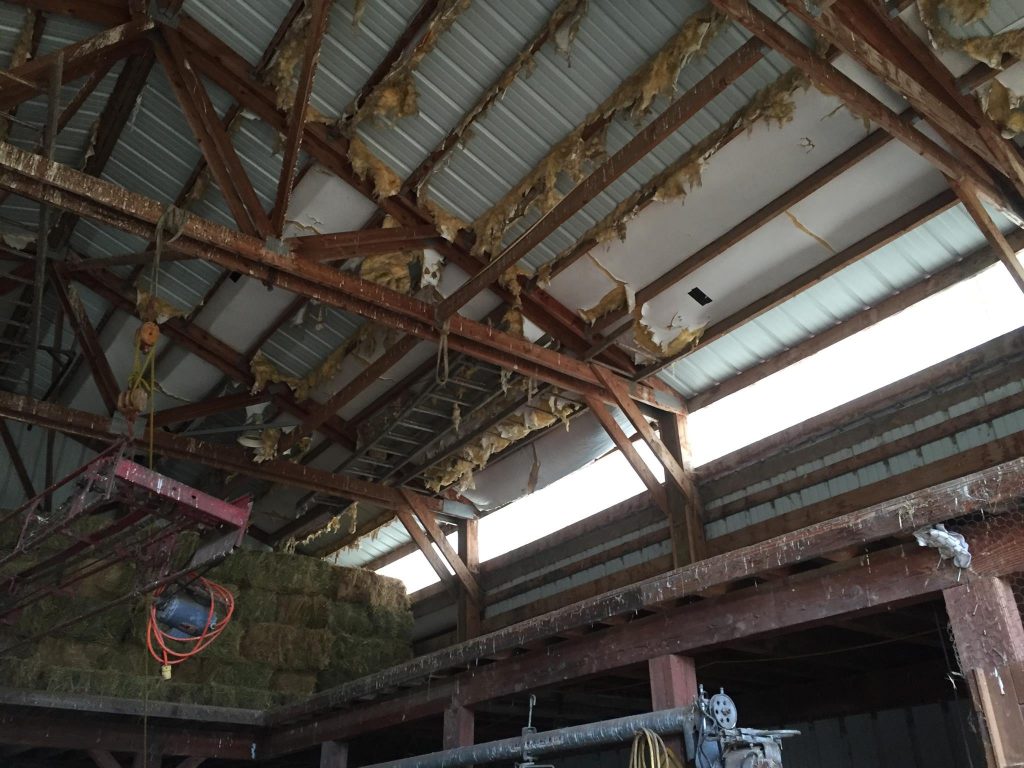 So, what’s wrong with this photo anyhow?

Obviously bird excrement over everything does not pose a structural problem, but one which I would have been trying to minimize, if not avoid. One thing which was leading birds into building – excellent nesting material provided by what was once a vinyl faced fiberglass condensation control blanket (aka Metal Building Insulation).

Long ago I had espoused about joys (or lack thereof) involved in installation of Metal Building Insulation (https://www.hansenpolebuildings.com/2011/11/metal-building-insulation-in-pole-buildings-part-i/). For those of you readers who did not click upon link and read it in full, suffice it to say birds love fiberglass.

Once condensation control blanket was torn apart – there was nothing left to prevent condensation from occurring below roof steel.

Moving forward, just glancing upon structure supporting hay loft, I would suspect a high degree of under design with only chance keeping it from meeting its demise.

All sorts of things are seen hanging from trusses. Amongst these are a block and tackle, which I suspect has been used to lift bales of hay into loft. Fortunately, individual small hay bales are relatively light, as I am pretty sure trusses were not designed to support added point load weights.

While not most effective structurally, trusses can be designed to be placed upon each side of a column – provided they are done correctly. Blocking should be placed between truss bottom chords, in order to prevent weak axis bending. A bare minimum would be every ten feet.

I see no web bracing, making this highly suspect. Older barns tend to have had bracing needs neglected. Single trusses (when placed not nailed directly face-to-face into a pair, they are single) require a great deal of bracing.

Knee braces are what I see as biggest structural issue. Not only are knee braces ineffective (https://www.hansenpolebuildings.com/2012/01/post-frame-construction-knee-braces/), but when installed improperly (as in photo) they are potentially throwing a load into roof truss bottom chords trusses were not designed to withstand.

Feel free to chip in with your observations.

When I was in junior high school, our P.E. teacher, “Chic” Sales had the largest tennis shoe any of us had ever seen on the wall in his office. Now this tennis shoe had a life of its own, and was named Martha. Act out in class and it was your turn to bend over, grab your ankles and get a visit from Martha. This was Mr. Sales’ version of the paddle.

So, you may ask, where is this going? In the western United States, many pole buildings also use a paddle, but not this kind. 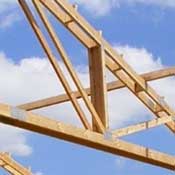 A very popular method of constructing pole barns in this part of the country is to place a prefabricated roof truss on each side of the interior columns. At every roof purlin location, a short 2×6 block (known as a paddle block) is placed between the two trusses. The length of the block is equal to the thickness of the roof truss top chord plus the size of the roof purlin. With a 2×6 top chord and a 2×6 roof purlin, the length of the block is 11 inches.

Paddle blocks are held in place by driving nails through the top chord of the trusses, into the narrow (1-1/2 inch) edge of the blocks. Generally builders will use as many as three 20d (four inch long) nails from each side.

If your first though was, “this is a lot of very large nails, into a very small block”, you are absolutely correct. More often than not, the nails will split the paddle blocks, if not immediately, the splits will appear over time.

Once in place, the roof purlins are located uphill from the block. The purlins stagger at each truss, with the first purlin attached to the paddle block with two to four nails, then the second purlin being nailed to the first, with the nails extending into the block as well.

Now, as many as 14 nails will have been placed into a single block, pretty well guaranteeing the paddle block’s inevitable failure.