It was a cold morning….and I was working on one of the first pole barns I had ever built. With the roof all framed up, it was time to install the roof steel, or so I thought.

In a pile, on the ground, were bags of something white, about as large as an oversized water heater. Metal Building Insulation (in the industry also known as “MBI”). This not being my first rodeo (and me being young and cocky), I went over to pick up a bag and found it not only was heavier than Hades, but it was also soft and squishy, not the easiest thing to maneuver and I was going to somehow get it up onto the roof? 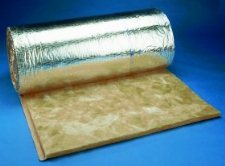 MBI is a thin fiberglass blanket (as thin as an inch), glued to a white vinyl vapor barrier. The fiberglass is usually six feet in width, and the vinyl is slightly wider, so as to create a tab on each side. Under ideal circumstances, with no punctures in the vinyl facing and the seams tightly sealed, it can be a very effective vapor barrier. What it is NOT, is a very cost effective method of insulating a pole building.

Back at the building site, I’m doing my best to alligator wrestle a bag of this stuff up a ladder and onto the top of the roof purlins. Winning the battle, I slice open the bag and find out this stuff smells bad, really bad….rather reminded me of when our male cat staked out his territory when we were kids. Ugh!

Once out of the bag, it took several of us to stretch it across the roof and get it into place to be able to install the roof steel over it. Into place involved unrolling these gargantuan rolls with the itchy fiberglass side up. To properly install, the lead edge needs to have several inches of fiberglass removed, the vinyl facing is then folded over and staples are put through into the top of the eave purlin. The roll is run up over the ridge, down to the eave on the opposite side, and the “remove-fold-staple” process is then repeated.

Failure to start a roll properly leaves bare fiberglass at the edge of the building. Strangely enough, when the roof is wet, water droplets can get to the edge of the roof steel and actually cling to the underside at the edge, rather than dripping off the roof. Exposed fiberglass can cause these droplets to be wicked up into the insulation – causing moisture problems inside the building.

The first roof steel panel was then placed on top of the fiberglass and screwed on. First thing I noticed is the thickness of the fiberglass caused the steel to bow up in between each of the roof purlins, rather than laying smooth. My thought was it looked rather like Bibendum (aka the “Michelin Man”) from the tire commercials.

When it was time to lay the next roll of insulation in place, I asked what I was to do with the tabs on the edges and was quickly admonished, “don’t worry about them”….so I didn’t. Only years later did I find out the true purpose of the tabs was to keep any warm moist air, from inside the building, getting through the seam and contacting the underside of the roof steel and condensing. Without an absolutely tight seal, moisture will form and now be trapped in the insulation between the roof steel and the vinyl vapor barrier – potentially causing deterioration of the roof steel from the inside.

In order to properly seal the tabs, they are to be held together, folded over once, and then stapled with stainless steel staples along the full length of the seam. I truthfully know of a total of zero instances where this has actually been done.

I believe I had mentioned before, it was cold at that jobsite. It had also been cold when the insulation rolls were delivered and thrown off the back of the delivery truck. Below 40 degrees, the vinyl facing becomes brittle and will crack – which is exactly what had happened in this case. After we had the roof done from the outside, we had to use insulation tape to patch literally a hundred or more cracks and tears in the vinyl facing on the inside!

From an installation standpoint, nothing involving MBI could be thought of as being fun. Or, worse yet, profitable.  Come back tomorrow to hear the “rest of my story” on metal building insulation….

Pole Building Prices: Beware when you compare
For TBF (throw back Friday) we are reposting an ol...
Ladder Framing, Use of Red Cedar Posts, and Custom...
This Monday the Pole barn Guru answers reader ques...
Wintertime Pole Building Dreaming
It’s not even December and I’m already tired of pu...