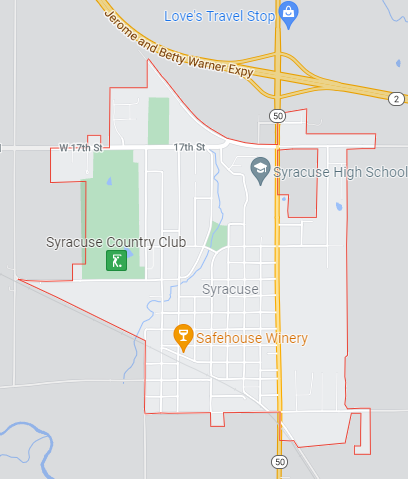 Syracuse, Nebraska was laid out in 1869 when it was certain railroads would be extended to it. With a population of roughly 2000, Syracuse is pretty well smack dab centered in Nebraska, in Otoe county.

While Syracuse might be small in numbers, they are forward thinking in following what is trending in housing in our country – barndominiums and shouses (shop/houses).

From an article of September 9, 2021 by Patty Buchholz and published on News Channel Nebraska:


“The website Pinterest offers over 160 images of a trend where designs of pole barns, metal sheds and shops are being used for living quarters called a “shouse” and now there may be some coming to Syracuse.

The city council voted in favor of an ordinance Wednesday that will allow Building Inspector Bruce Neemann to issue permits for shouse construction.

Neeman told the city council he has had several inquiries about the “barndominium” concept, which are typically metal buildings used for living and storage.

Councilman Jerry Werner expressed concern regarding the square footage of living space that would be needed to qualify as a shouse, rather than just a shed.

The council approved the shed/house combination for land zoned transitional ag and in residential areas with a conditional use permit.”

Considering one Facebook group alone, “Barndominiums Under 150k” has grown in membership by over 50,000 in 30 days – it will not be surprising to see more jurisdictions riding this popular and affordable trend.

If you are considering building a barndominium or shouse, start by reaching out to your jurisdiction’s Planning (or similarly named) Department to see what restrictions there might be: https://www.hansenpolebuildings.com/2020/01/your-barndominiums-planning-department/

Should you be told, “You can’t build it here”, please get a copy of any applicable WRITTEN ordinance (experience leading me to realize rarely does one exist) and forward it to me at PoleBarnGuru@HansenPoleBuildings.com. I will review it and go take on City Hall (or County Courthouse) for you.

Building Designer Rick Carr and I were discussing a client’s proposed building in Idaho today. 80 feet wide by 204 feet long, the building would have a 16 foot high sidewall. The client really wanted to have scissor trusses (trusses with an interior roof slope, which has a peak in the center). Given the dimensions and the request for the added height in the center, I asked Rick if the pole building was to be used for cattle roping.

While Rick was unsure, I advised if the client was using it for roping, to ask if he knew Justin Skaar. Justin is from Twin Falls, Idaho, and is a long time and well known non-pro roper. About 20 years ago, my company constructed a roping practice pole building for Justin.

Rick asked me if I remembered the names of everyone I had ever done a roping arena for, and I laughed and said no, just some of them.

This got me to thinking about a few of the more interesting clients I’ve dealt with over the past 30+ years. Here are some of them:

Larry Mahan – won the title of World All-Around Rodeo Champion for five consecutive years from 1966 to 1970, and a sixth time in 1973. His 1973 comeback and competition with Phil Lyne was the subject of the documentary The Great American Cowboy which won the 1973 Academy Award for Documentary Feature. Mahan was also World Bull Riding Champion in 1965 and 1967. He is the host of RFD TV’s Equestrian Nation. In the 1980’s we supplied two pole barn kit packages to Larry.

Jeff Lahti and Ken Dayley – each of these major league baseball relief pitchers got a pole building so they could throw indoors in the winter. Jeff (the righty) was with the St. Louis Cardinals for five seasons and was their “closer” in 1985. Ken (the lefty) pitched 11 major league seasons for the Braves, Cardinals and Blue Jays. His best seasons were 1985 and 1987, when he appeared with the Cards in the World Series (Ken was the winning pitcher of one of the 1985 games). 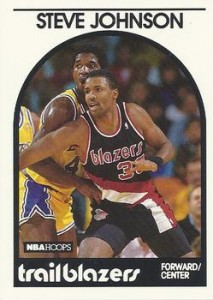 My all-time favorite is former NBA All-Star, Portland Trail Blazer Steve Johnson, who we provided a garage/shop building for. When my first born daughter Annie was alive, her favorite team was the Blazers. When we could get tickets, Annie and I had to be at the games early enough to walk courtside so she could get a perspective on which players were taller than her 6’5” dad.

Steve was an Oregon State University standout and was drafted in 1981 with the seventh pick by the Kansas City Kings. After stops with the Chicago Bulls and San Antonio Spurs, Steve arrived for Portland’s 1986-87 season in a trade for Larry Krystkowiak and Mychal Thompson.

My then ten year old daughter developed a major crush on Steve, and was heartbroken when she found out he was married. My daughter suffered from cystic fibrosis and the last time she was in the hospital, in 1989, Steve made a special trip to visit her in the hospital in Salem, certainly one of the highlights of her short life.

I could ramble on and on about others, famous and not so famous – but these are ones who have stuck in my memory.