This is a Test: Steel Strength

Once again, we hop in the “Way Back Machine” and visit what to some might be viewed as ancient history. Sometimes in life – to know where we are, it is important to know where we came from.

After selling my first post frame building business, M & W Building Supply, to Jim Betonte in 1990, I did some work for him as a consultant. One of the missions I was assigned to was to determine the shear strength of the steel roofing and siding being used on the pole buildings M & W was providing.

By having tested shear strength, the steel skin could be utilized structurally, much as plywood or oriented strand board (osb) is used. Plywood and osb have values which are published in the National Design Standards (NDS) for wood. At the time, limited testing had been done on steel panels, for shear strength. A testing procedure had been developed by the ASAE (American Society of Agricultural Engineers) Structures Committee, of which I was a member.

Alumax had a testing facility in Perris, California. Under the watchful eye of their then chief engineer, Merl Townsend, we constructed a roof assembly using rafters spaced every 12 feet (to simulate roof trusses), and 2×6 purlins on edge. On top of this, we installed the thinnest possible steel we could get in the marketplace – it barely made 30 gauge (.0127 of an inch thickness). The steel was attached with the industry standard #9 diameter one inch long screws.

Once constructed, horizontal loads were applied to the rafters, using hydraulic rams. The rams were set up so as allow for the amount of applied force to be measured.

As loads were applied to the roof, we had a surprise problem, which we had not anticipated. The one inch screws were pulling out of the framing – and not enough load had been applied to the roof to even make a ripple in the steel.

OK, problem numero uno solved – we replaced the one inch long screws with 1-1/2” long screws. This length of screw did not pull out.

Next cyclical loads were applied to the assembly, to simulate applied wind loads. As these loads were applied, we started to notice slots forming around the screws, in the direction of the load. The slots became long enough to be past the edge of the steel grommets on the screws. While this would not have caused a structural failure – it would be considered a failure by most building owners, as their roofs would be leaking!

Merl was one very smart guy. He designed a screw to solve both the pullout and slotting problems. This part was 1-1/2 inches long, with a #12 threaded shaft, which tapered out to a #14 just below the head. The larger #14 diameter, kept the slots from appearing as testing went forward. Merl’s screws are now featured as the standard part in every Hansen Pole Building with steel roofing or siding.

Viewing the testing was amazing – waves would appear in the steel between the roof purlins, several inches tall. When the load was taken off, the steel snapped back to flat. Eventually, a 9600 pound horizontal load caused the steel sheathing to buckle permanently.

From my previous experience in testing nail laminated columns, I knew we could only use 40% of the ultimate value (failure point) for designs. At the 40% point, there was not even the slightest ripple apparent in the steel roofing. The results of our testing have been accepted and are published in the National Frame Builders Association “Post-Frame Building Design Manual” Table 6.1 test assemblies 13 and 14.

These tested values are very comparable with those obtained from plywood and osb sheathing, so think of steel roofing and siding as performing like very thin, very strong plywood.

Most alternative eco-friendly roofing materials, such as those which contain a high recycled content, are about three to four times the installed cost of asphalt shingles.  This is a hard sell for anyone, no matter how green you want to be.

There may be a reason to be optimistic for the future, however. Euroshiled Roofing’s EuroLite Slate is made from over 75% recycled materials – rubber tires! An average roof will utilize 600 to 1000 rubber tires. The installed cost of this material, which comes with a transferable limited lifetime warranty (non-prorated for the first 50 years), is actually comparable to the installed cost of premium asphalt shingles. This is unprecedented as far as eco-friendly roofing goes. 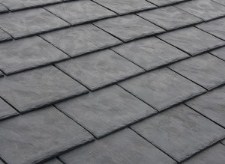 How green is it?  Well, those recycled car tires are certainly saving landfill space.  And the shingles themselves are 100% recyclable.

The main reason this product is more affordable than other recycled roofing options is it installs quickly and easily. It goes down in 40” x 17” panels which handle and install similarly to asphalt shingles, with some special design perks which are supposed to make it even easier.  Moral of the story is this isn’t a difficult roof to install and if your contractor is inflating the cost beyond what he would charge to install asphalt, then you may want to press him a bit on why.

Plus, it looks good.  Even up close it looks like slate, although it is much lighter.  From street level you’d have a real tough time telling the difference between recycled roofing and genuine slate.  The shingle is available in grey, black and brown.

The downside is the product is made in Calgary, Alberta, Canada with limited distributorship in the US.  They will ship product for a single building, but this could get mighty expensive.  Hopefully the company will secure more distributors in the US soon, because judging from the consumer searches for roofing material there is a healthy demand for eco-roofing.