Growing up with my Father and six framing contractor uncles (my Dad’s five brothers and Auntie Darlene’s husband Vern) all of us male Momb cousins (myself, brother Mark, Kim, Randy and Scott) eventually became M.E.I. (Momb Enterprises, Inc.) teenage slaves. My beloved Uncle Gil even has on his Facebook profile, “Former Mean Boss at MEI”. Whilst our generation worked hard, we were generally looked upon as strong backs and weak minds – there was very little explanation as to why things were done a certain way, and lots of do it, do it quick and do it right.

In framing stud walls, Uncle Gil would give us an evil eye if we had a stud even a minute fraction of an inch off being directly between his lay out marks on top and bottom plates. Never was there a discussion of why it was we were framing with studs 92-5/8” long, when all other framing lumber came in even two foot multiples (albeit those were always ½” to 5/8” greater in length than an exact two foot).

Now an average small home takes roughly 400 studs, can you imagine how time consuming it would be to have to trim back all of these if eight foot material was ordered and 92-5/8” was desired?

It wasn’t until I went to work managing Lucas Plywood and Lumber’s roof truss plant, where I became exposed to “P.E.T.” – Precision Trimmed Lumber. This was one service provided for by our lumber remanufacturing (aka reman) operation. While there, since I was good at math, I taught members of our lumber sales team how to do material takeoffs for stick frame home lumber packages.

Helpful hint to those of your reading along at home – want studs 16” on center (o.c.)? Take lineal footage of walls and order the same number of studs as feet of wall. 24”o.c. take lineal footage x 2/3rds. Works out to be remarkably close in actual use. 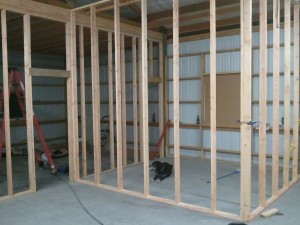 When 92-5/8” studs are placed upon a single 2x bottom plate and a double top plate, wall height becomes 97-1/8”. This allows for 5/8” drywall on ceilings and keeps wall drywall ½” above the subfloor. This gives space for drywall to expand and contract without affecting flooring, as well as from absorbing any moisture on the floor.

Even though post frame buildings, with interiors to be finished, should be properly designed using bookshelf (horizontal girts) for exterior walls, these same rules are best followed for determining floor-to-ceiling heights. By use of heights 1-1/8” greater than whole feet, material use is minimized and drywall sheets can be run vertically without need for cutting. For extended reading on why this is best: www.HansenPoleBuildings.com/2019/09/11-reasons-post-frame-commercial-girted-walls-are-best-for-drywall/.