Today’s Pole Barn Guru discusses reader questions about types of columns used in Hansen Pole Buildings, what type of car for a small 2 story barn, and the best site preparation.

DEAR POLE BARN GURU: Good morning. I was just running through your website looking at the different materials you guys use for your buildings and I could not find the type of column you use. I know some people have 6x6s, some use 3ply 2x6s and others use the glulam columns, both spliced and un-spliced. If you could let me know now your method that would be great. Thanks! BLAINE 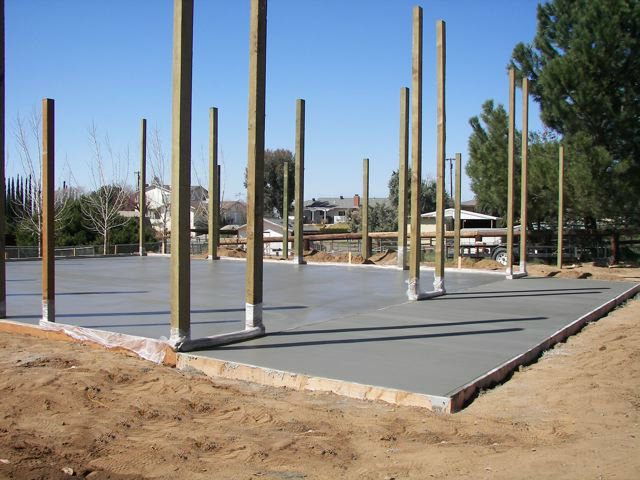 DEAR BLAINE: We supply either solid sawn timber columns or glulaminated columns depending upon where building is located, client request, and/or climactic conditions. Glulaminated columns have finger jointed and glued splices – unlike some nailed up columns.

DEAR POLE BARN GURU: I’m looking at wanting to build a 30 x 40 2 story pole barn with the barn roughed in for a second floor and just one small garage door what kind of car should I be looking at? Do you do work in Southwest Missouri? 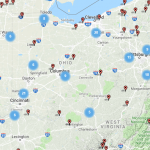 DEAR SOUTHWEST MISSOURI: Well, you are probably best to get a car fitting your family’s needs. Personally, I drive a 2012 Chevrolet Avalanche – because if something hits me I would like to survive.

For a single vehicle overhead garage door 10 feet of width and seven feet of height should keep your mirrors on. For sake of resale value, you might want to consider going with a 16 foot wide door, as it offers wider appeal to future owners of this building.

DEAR POLE BARN GURU: What preparations must be made for the ground for the area that a pole barn is to be built on? Is a base such as a concrete slab, or gravel required, or may one be built only with the poles in the ground, and the concrete holding them in place? JOSHUA in BECKETT 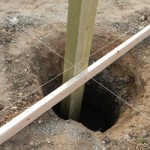 DEAR JOSHUA: Simplicity is a part of post frame (pole barn) construction. If your building will not need a concrete slab on grade, then you could merely auger holes, then place them with limited amounts of concrete in hole bottoms to resist settling, overturning and uplift. If your future plans include a concrete slab, then more extensive site preparation should be done to insure proper results: https://www.hansenpolebuildings.com/2011/11/site-preparation/.

Building Official Out on a Limb

Don’t get me wrong – in case I have not previously gotten my message across in earlier articles – I genuinely like Building Officials.

Most of them really do care, and go out of their way to help both do it yourselfers and building contractors. With very few exceptions, Building Officials, field inspectors and plans checkers are not registered design professionals (architects or engineers). It is when structural concerns arise, which can get them in over their heads. Going too far out on a limb without support can be dangerous.

I was contacted by one of our clients over the weekend, who is putting up his own building. The site is in the western United States, and in his particular case the design wind speed requirement is for 105 mph (miles per hour) with an Exposure C for wind (a site which is not protected from the wind). In the west, the lumber species of choice for treated timbers is generally Hem-Fir. It takes a pressure treatment well (albeit with the need to be incised) and is fairly plentiful. 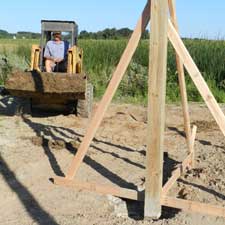 The building plans call out for the sidewall (double truss bearing) columns to be 6×8, with the six inch face oriented towards the sides of the building.

Columns in pole buildings must be able to support combined forces from bending (the wind) and compression (weight of the roof and any applicable snow loads). In most cases, the bending forces are going to be the majority of the issue.

The reason for the contact from the client was – he placed his posts with the wrong side towards the wind!

Now in construction, things happen…..it is solving the things which keep it interesting. And in pole buildings, I can’t think of a time a challenge didn’t have one or more solutions.

The client was told by his building official, “normally a 6×6 is sufficient” and he would sign off on the posts the wrong way, as long as we provided a letter stating so.

Our proprietary pole building design software gives the calculations for every component of the building. In this scenario, the columns needed to resist a ground line moment of 37,184 inch-pounds (for more on “moments” please read: https://www.hansenpolebuildings.com/blog/2012/09/bending-moment/).

Oriented properly, the 6×8 has a section modulus (Sm) of 51.563 inches. Sm is derived by squaring the depth of a member, multiplying by the width of the member, and then dividing by six. The calculations showed the columns, as designed, to be stressed to 98.4% of capacity.

Turn the column the wrong way, and the Sm is reduced to 37.82 inches and it is now overstressed by 34.2%!! Same timber. Wrong direction. Wrong answer.

The client does have some options:

The building official could sign off on the columns as placed, making him now the designer of record (I would not recommend he do so).

In cases such as this, building officials could agree to allow the building to be designed for a lesser wind speed and exposure. At 90 mph and Exposure B, the columns would work in the orientation they were placed.

The columns could be pulled out of the ground and placed the correct direction.

Or, we could come up with a repair – which could prove to be difficult and costly. It will depend mostly upon how far along the construction process is.

Moral of the story, the direction any column is to be placed in a pole building is specified on the plans. It is not a suggestion. There are valid structural reasons it must be oriented exactly as designed. This is one place where a mistake is not so easily corrected, as the columns are literally set in stone (concrete).