A Shouse in Andover?

Shouse (from www.urbandictionary.com):  “A portmanteau of “shed” and “house”; A structure that outwardly resembles a shed (typically having a roll-formed steel-sheet exterior) that is primarily used as a dwelling / house. Though not required to fulfill the definition, a shouse generally has garage(s) incorporated into the structure.”

I did not even realize I was shousing before it became cool! My first personal shouse experience was at our home at Newman Lake, Washington over 25 years ago. We needed a garage to winter our boat in. One thing lead to another (including an expensive lawsuit with our neighbors – we won) and before we knew it, we were putting up a three story garage. Well, more technically a three story post frame building with a garage/shop on lowest floor and two more habitable floors above! Oh, and a rooftop deck!

Some jurisdictions are having challenges grappling with getting their heads wrapped around shouses and barndominiums. Here is a case in point:

From a June 4, 2019 a Quad-City (Davenport, Iowa) Times article by Lisa Hammer

“Someone has approached Mielke (Village President Mike Mielke) and asked about building a combination shop/house in a pole building, called a “shouse,” in village limits. Mielke did not give him a definitive answer. Village attorney Mike Halpin will look into it and bring back suggestions. It was noted Andover already has one such structure. “We have one, but it just kind of happened,” Mielke said. The existing “shouse” is located between Cedar and Elm on 7th Street and originally had a farmhouse on the property that was eventually taken down. Village Clerk Bev Josephson noted there can’t be only a pole building on a property without a house, so people would have to build both at the same time.” 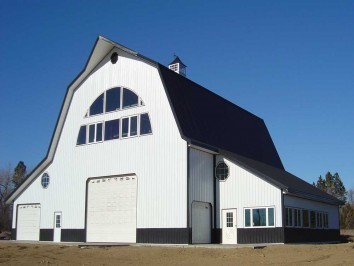 As long as your proposed shouse or barndominium meets planning and zoning requirements – adequate setbacks, allowable footprint, within any height restrictions and doesn’t use unapproved siding and roofing materials you should be good to go. Post frame (pole) buildings are Code conforming – so an attempt to prohibit one strictly due to its structural system is a battle I will take up for you at no charge.

I will add that in fact my bride and I live in a 48×60 shouse with a full garage on the lower level, the “house” portion on the second level (complete with an elevator), a 18’ width boat shed/shop on the west side and my 18’ width office on the east side. It is a beautiful building, inside and out and we love it! The attached photo is our lovely shouse.

Need a 13′ Tall Door With a 12′ Mean Height Restriction

Need a 13’ Tall Door With a 12’ Mean Height Restriction

Planning Departments can be the bane of a property owner’s existence. They are the folks who are delegated enforcement of what some might feel are unrealistic expectations as to building heights and footprints. Many times there are solutions, and chances are if a solution can be sleuthed out, we at Hansen Pole Buildings can creatively arrive at it. 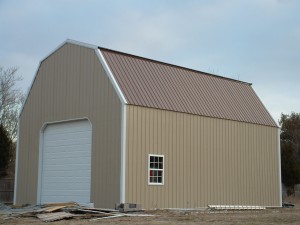 “Hi Guru,
I have cleared my build with the county (San Diego, CA) and have checked into my setbacks and am all set; moved 120 yards of dirt and graded the site out as well. My dilemma now is that with my setbacks I need to comply with some sizing restrictions but still need to fit my RV in the garage; the whole point of the building… I need to be under 1000sf so a 24′ x 40′ is perfect for me. The issue comes in the height of the building. I can’t be any higher than 12′ tall on my mean roof height which is to say the average height of the roof. So I could have a ridge that is 14′ if the eave is 10′ making an average of 12′ roof height. I could get more extreme and make a 16′ ridge height and 8′ eave height and still comply. However with any style of roof I need to have a 13′ clear opening for a garage door to fit the RV height. I could center the door and shrink it down to a single but would like to keep a double garage door (16′) or at a minimum a 12′ door. I think that the “barn” style would give me the best roof profile to fit the largest door in while still keeping a roof height that complies (again a 12′ average/mean height). Can you help?! Does the gable end of your barn kits have bottom truss or is it open? I keep laying it out on a scale drawing with standard roof pitches and it doesn’t pencil out; I can’t even fit a 9′ door in a 6/12 pitch roof.”

Here is just one creative solution:

A gambrel (old barn style) roof is probably your best (and only) solution. Think of your building as a center portion which would be 18 feet in width and 15′ tall. This would allow for an overhead door 16 feet wide by 13 feet tall. With a 4/12 roof slope, the overall building height would be 18′. In order to comply with the 12′ mean roof height, the remaining three feet on each side of the 18′ would slope from 15 feet down to six feet (a 36/12 slope). This would allow you to get your RV in and yet comply with the requirements of the county.

Trying to do what feels like it is dimensionally impossible with your new post frame building? Run it past us, we may have a design solution for your challenge which will fit within your measurement restrictions and your wallet!