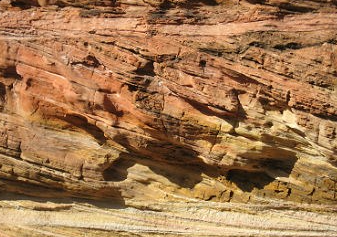 Is #57 Crushed Gravel a Good Choice?

Thank you to reader KEN in BRECKSVILLE who writes:

The rear of a 48′ deep pole barn has about a 6′ drop in ground level from the front end. A retaining wall and 57 stone fill are planned to be used to level the site.  The wall height is 16′ and width is 36′.  The rear posts will need to be 6′ longer than the front to secure the posts in virgin ground not filled in with leveling stone.   At a 16′ wall height I will need posts at least 20′ long for the front and 26′ long for the back.  Do you provide posts this length or is it better to use shorter posts in the back to secure in the ground and attach additional posts on top of these posts for the wall heights.”

Before answering, I (knowing not nearly enough about stone) had to research 57 stone fill. 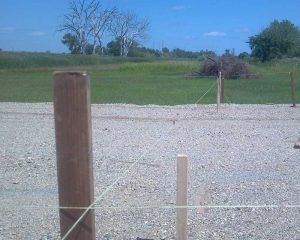 Contrary to popular opinion, there’s more than one type of gravel and selecting proper size and style is crucial to project success. One most commonly used and versatile type of gravel is #57 crushed.

When considering different gravel or crushed stone types, a number indicates sieve size a material is screened through.

A #57 sieve produces gravel materials approximately 1” – 1.5” in size. To put this into perspective, you can expect gravel in this size family to be around the same size as nickels and quarters.

Depending on where it was manufactured, #57 crushed gravel may be comprised of granite, limestone, trap rock. Because this type of gravel is so common, it is highly affordable.

Without using DGA (Dense Grade Aggregate comprised primarily of ¾” minus crushed stone aggregate combined with a careful and precise mixture of stone dust as a means of reducing void contents), or a similar material, you will find this is not an ideal sized gravel for creating an extremely firm, compact surface.

My answer to KEN:

We can get columns over 60′ in length (I have them up to 50′ long on my own personal shouse in South Dakota). Attempting to attach a post on top of a post is not a good structural solution, so I would eliminate it as a consideration.

My recommendation would be to build your retaining wall first. Place fill in maximum six inch lifts, compacting each layer to a minimum of 90% of a Modified Proctor Density before adding the next layer (you will need to do this sort of compaction to support a slab on grade properly anyhow). You can then treat your fill as if it is undisturbed soil and would not require longer columns. Your idea of using 57 stone fill is probably not going to yield a good result, as it is not ideally sized to create an extremely firm, compact surface (what you want).

How Long Will it Take to Erect My Post Frame Building?

How Long Will It Take to Erect My Post Frame Building? 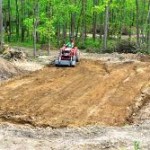 Before any question of construction time can be addressed, let’s eliminate one crucial variable –dirt. Time to lay out a building and dig holes depends upon so many factors. Is the building site level? If it is level, is your building’s prepared pad, actually large enough to place batter boards on? Sites “too tight” to work on will slow everything down.

October 30, 1996 when my company set a world speed record constructing a fully featured two car garage on site, we had a daunting task of it being under five feet from fences along one side and an end. And we still completed it in 31-1/2 minutes! Yes, minutes!

What is the site’s soil like? Soils with medium soil bearing pressures (1500-2000 pounds per square foot), generally are pretty good to dig in. Extremely sandy? Conical shaped holes will be created and they are hard to clean out. Lots of clay? When wet it sticks to everything, when dry it can be as hard as concrete. Head sized rocks? An auger will only pull up rocks up to one-half bit diameter. Limestone, granite, or caliche? If it sounds hard, it probably will be.

Available equipment type for digging holes plays a huge part in digging time as well. By hand with a shovel and clam shells is going to be much slower than a line truck with an auger.

So….putting dirt in our rear view mirror, we move forward (and upward)!

When I was running my own construction crews, we used to monitor carefully approximate amount of construction time it would take crews to erect our buildings. There were always some exceptional crews, ones who we would shake our heads at wondering how they built things so fast. One particular four man crew, would start on a 60’ x 120’ x 16’ riding arena Monday morning, and be in our office at noon on Friday with building done and collecting their payment. Their secret? They had worked together for so many years they did not even have to talk to each other on a jobsite. Each knew instinctively what to do next and what their fellow crew members were doing.

When I put up my first prefabricated roof truss assembly building, I contracted with them for roof steel installation. On this 60’ x 84’ building, I was almost disappointed when they completed it in under four hours!

Getting back to more average performances…. measuring person hours (yes, I had an all-female crew) to building value ended up being a fairly constant measure. Keeping in mind, this is all my crews did, so they had lots of experience They would assemble $120 of materials per person hour. Other than those few exceptional crews, this was a solid number to work from with a variability of about 10%.

For an average building owner doing their own work, I’d look at it taking twice as many hours, provided their “homework” of reading assembly instructions and reviewing plans for their next day’s work was done off actual construction time.

Can you construct a post frame building kit package yourself? Most probably, and as long as you are physically capable, will read and follow instructions, it will be a beautiful building. Should you build it yourself? Assuming a $24,000 building kit, plan on around 400 person-hours. Hired out, it is probably reasonable to spend roughly $12,000 for labor. Obviously this dollar amount will vary greatly from locale to locale. Factors such as distance to travel to a jobsite and costs for insurance weigh heavily into this equation. If a labor quote is $12,000 and you can build it in 400 hours, you have “paid” yourself $30 per hour.

Besides cost savings, there is a satisfaction of having created your own beautiful building and chances are –the outcome will be better than having hired it to be done!