Required Bracing or Not?

When he was just a tyke (I considered adding in ‘little’ however he was 3’6” tall on his second birthday) my son Brent asked me in all seriousness what it was like to watch space aliens building pyramids. While I am not quite as old as Brent may have thought I was then, it has been awhile since I was muddling through architecture school.

Architecture school, back in my day, was more about drawing pretty pictures than it was about how to make sure those pretty pictures would actually stand up. I do foggily remember having an eight a.m. structural design class at Montana State University (who in their right mind would schedule this class mid-Winter in Bozeman?).

ASCE (American Society of Civil Engineers) News had a summer guest contributor (Kyle Vansice) in 2012 who wrote about some of famous architect Frank Lloyd Wright’s work. Some excerpts include:

“However, I believe that Mr. Wright more likely stretched the existing construction techniques past their previous limits, possibly to a degree that diminished the factor of safety.”


“Unfortunately, Mr. Wright’s genius in architectural design was not matched by his understanding of engineering principles.”

“I believe the engineering behind his designs did not meet the exacting standards typical of a Frank Lloyd Wright space. Mr. Wright believed that the structures of his day were large, bulky, and overly engineered. He felt that it was possible to challenge conventional wisdom and beat back some of the conservatism in structural design. I think it is also true to say that while he knew existing limits were antiquated, he did not fully appreciate the actual physical constraints that his designs surpassed.”

“A good example of the need for structural remediation can be found in Mr. Wright’s riverside masterpiece, Falling Water. The iconic cantilevered portions of the home had at one point deflected close to seven-inches over their fifteen foot span, and analysis of the structure has revealed that the as-built design had placed these cantilevers dangerously close to their failure limits. Post-tensioning was eventually required to restore these portions back to their intended elevation and to prevent the sort of catastrophic collapse deemed inevitable (Tyler Meek, Fallingwater: Restoration and Structural Reinforcement).”

“Other well-known examples of Wright’s imprudence in engineering include the Guggenheim in New York and Taliesin; both of which encountered significant structural rehabilitation in order to restore serviceability and prevent failure.”

“Have you ever heard of a county that requires knee bracing or corner bracing via comment below from one of my clients:

“Architects and structural engineers are telling me that all buildings need knee bracing, corner bracing, etc., which in a traditional stick build is the norm”.”

If one is to venture into a Building Department and not have engineer sealed building plans, it is fair license for them to add in any structural members they desire (whether structurally necessary or adequate). These hard working folks are generally not engineers.

Most architects (even our iconic Mr. Wright) have a limited grasp of how to structurally make things work and rely upon engineers to come up with designs to prevent failures. When it comes to fully grasping nuances of post frame design, there are a limited few engineers who have done research necessary to achieve practical design within limits of safety.

Knee bracing, for one, would be a rare feature of traditional stick building and when applied to post frame construction could be detrimental. (https://www.hansenpolebuildings.com/2012/01/post-frame-construction-knee-braces/).

Corner bracing (also referred to as diagonal bracing) in most instances is a redundant member, should an engineer actually understand principles of utilizing shear strength provided by steel skin (roofing and siding). Extended reading on diagonal bracing can be found here: https://www.hansenpolebuildings.com/2016/03/diagonal-bracing/.

There is a moral to this story – unless you are building using prescriptive tables within building codes (IRC or IBC), you are best to only build from fully engineered building plans, both for safety and cost effectiveness. If you are hiring an engineer to produce your plans, look for a NFBA member engineer (www.NFBA.org) with extensive post frame experience. Or, even better, invest in a complete building package including engineer sealed plans specific to your building, at your site and including extensive step-by-step instructions and unlimited free technical support from those with actual post frame building experience.

Yes indeed folks, as probably every owner of a roof only post frame (pole barn) building can and will attest, they sway with the wind.

Reader MIKE in ORLANDO was concerned about his new (not from Hansen Pole Buildings) roof only pole barn moving just from his installing steel roofing panels.

“I just completed the roof panel installation on my open-sided (roof only) Pole Barn structure. It is 38 x 48 with 14 ft eaves. The posts are 8″x 8″x18 ft (4 ft in the ground with full concrete embedment).

While working on the roof I noticed a sway in the structure. As I move around on the roof, the entire roof moves back and forth. It is the poles that are swaying!

This is my first Pole structure (I am self building it from a kit and following the engineered plans).

Is this normal movement? It makes me nervous to walk on the roof – but more importantly, will this be an issue with normal wind forces? Should I add any bracing (like girts between the posts) at the top of the posts to make the structure more rigid?

Thanks for your help.” 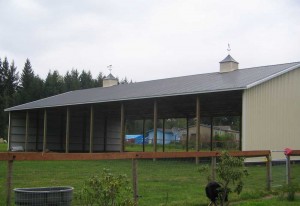 Your building’s entire roof moves because its columns are working as pure cantilevers – like a diving board. Jump onto an unsupported end of a diving board and even though the board has a well anchored opposite end, the free end flexes. And flexes lots.

Wind (or you installing roofing) causes your building’s posts to act in a similar fashion. Only practical way to reduce or eliminate this will be to cover one or both endwalls from roof to ground with a properly engineered wall (or walls). Unless you truly need to have a just a roof only building, I would recommend you contact your engineer who produced your building’s original plans and contract with him or her to design one or both endwalls for you.

For more reading about roof only pole barns: https://www.hansenpolebuildings.com/2015/04/roof-only-pole-buildings/.