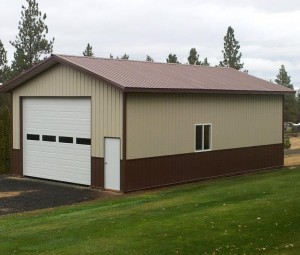 When it comes to pole buildings, a diaphragm is a structural assembly – including the timber framing (truss chords and purlins), structural sheathing (e.g. plywood, metal cladding), fasteners and fastening patterns – capable of transferring in-plane shear forces through the cladding and framing members.

Diaphragm action is the lateral resistance to racking of the building provided by the roof and wall coverings. The design relies upon the roof to act as a deep beam supported by the endwalls. This deep beam supports the tops of the sidewall columns when they are laterally loaded by wind pressure.

When a pole building is designed using diaphragm design the strength and stiffness of the system are utilized to transfer applied horizontal loads to the ground. The system includes the roof trusses, sidewall columns, endwalls, shear connectors, chord splices and ground anchorages.

The term diaphragm is usually applied to roofs, ceilings and floors. A shear wall, is just a vertical diaphragm. Shear walls supply support for the roof and floor diaphragms transmitting forces into the foundation. A diaphragm structure results when a series of diaphragms are properly tied together to form a unit. Diaphragms and shear walls used for the lateral design of a building for a box system.

The under design of any one of these (and other) crucial elements can result in the applied loads being unable to adequately transfer along the load path to the ground. Too great of a load with inadequate resistance can result in tragic results.

My friend, Dr. Kifle Gebremedhin of Cornell University, did extensive and advanced full-scale testing on a pole (post-frame) building, over a period of 16 years. His results showed post-frame buildings to be much stiffer than designers had previously believed – in other words, the design procedures being used underestimate the capacity of the buildings!

Proper design of a diaphragm system is not something the average lumberyard employee or building contractor is capable of understanding, with even a lesser chance of it being able to be done correctly.

Need a pole barn, pole or post-frame building? Rely upon experts who understand diaphragm design – the savings in materials and labor will easily outweigh the investment in paying for the expertise!