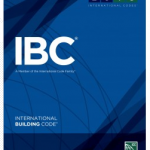 I’ve been reading (and commenting) in an online thread of a blog on another website, where someone is trying to decide how to construct a new pole barn. This morning, the following post was made:

“What I had done was to dig the hole like you were going to set the post (below the frost line). I had a local welder make metal brackets with rebar welded to the flat end. Form up a square to match the size of the post, pour concrete, then insert the bracket. The posts sets in the bracket and is attached using two bolts. Building inspector didn’t have any issues with it.”

I will truly do my best to be kind, and not go off on a total rant.

The most important point I am going to make is this – just because a Building Official doesn’t have an issue with something, does not make it either Code Conforming, or structurally sound. If I was in Code Enforcement, I would have demanded you provide calculations sealed by a registered professional engineer to confirm the adequacy of this design.

In My Humble Opinion, what you have is nothing short of terrifying. In the event of the threat of a strong wind, I would encourage you to remove any possessions you value from your building, as well as anything of value which is downwind from the building. Also, make sure you have the building well insured. 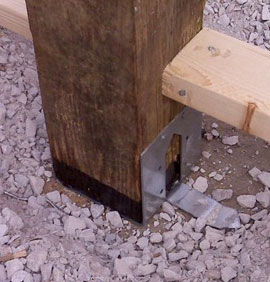 There are numerous commercially available post base metal brackets available. Very few of them are rated to be able to withstand moment (bending) forces. There is a very good possibility you could have purchased adequate and tested metal brackets, for less than what it cost to have the local welder fabricate these up for you.

From the photo, it appears the diameter of the holes is fairly small. If the columns are very close together, or the building has a very small span, they may be adequate to support the building from settling, as well as other issues.

Buildings of all sorts fail, but very few which have a RDP (Registered Design Professional) involved will ever fail, and those which do are almost universally due to loads being placed upon the building in excess of the design parameters, materials of lesser quality have been substituted, or plans were not followed. Armchair engineering is rarely a good choice. My best recommendation to you would be to hire a registered professional engineer to do a site evaluation of your building.  He/she can determine if what is in place is adequate.  If not, the RDP can design repairs to bring the building up to standards which will withstand the climactic loads which will be placed upon it. Best of Luck…and let me know how it turns out! 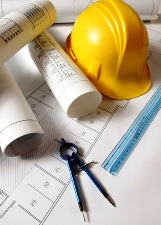