Chances are good if you have to ask a structural design question, then you are in over your head.

A few years ago, one of my neighbors bought a pole building kit from someone other than Hansen Pole Buildings. It was for a garage and sidewall columns and single roof trusses were placed every eight feet. Now I am relatively certain this building’s roof purlins were supposed to be 2×8 on edge between trusses – however for some obscure reason, they got installed flat wise! I am unsure as to how they were even able to get roofing installed without falling through. 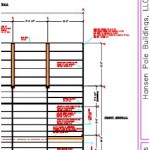 This is just one of many reasons why post frame buildings should be designed by a Registered Professional Engineer.

When it comes to designing whether a roof purlin can achieve a given span, it takes a lot of calculations – both for live or snow loads, as well as wind loads. In high wind areas, wind will fail purlins (or their connections) rather than snow! I have condensed calculations down to just bending and deflection and will use minimum snow loads in this example:

These calculations are based upon purlins every 24 inches on center. If you were to reduce spacing to say 11 inches on center then flatwise 2×4 #2 Southern Pine with a 20 psf roof snow load would be adequate.

If you were able to somehow acquire 2850f Machine Stress Rated 2×4 with a E value of 2300000 psi (very high grade material used by some truss manufacturers) spacing could be 18 inches on center.

Again – remember these equations are just for checking for bending due to a minimal snow load, wind conditions may dictate. Please consult with a Registered Professional Engineer for actual designs.

Before any of my readers drop their teeth due to me saying something I don’t exactly extol… is easy….read on!

I’ve spent the last few days in Michigan – where I am being told no Building Official would EVER approve of a pole building designed with double trusses spaced 10 or 12 feet on center and 2×6 or 2×8 purlins on edge. To the contrary, I’ve been involved in the design of about 15,000 buildings designed exactly this way. Throughout the Western United States, the typical post frame construction utilizes the concept of pressure preservative treated columns, spaced 10, 12 or even 14 feet on center, with two ply trusses, aligned with the sidewall columns. Literally hundreds of thousands of buildings have withstood snow loads to upwards of 200 pounds per square foot (psf) and wind speeds far over 100 miles per hours (mph). 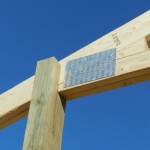 In post frame construction, roof purlins are the members running the lengthwise direction of the building, either placed on top of, or between the roof trusses (or rafters), to attach the roof steel or other roof sheathing to.

To the good folks in Michigan, the only way to construct a pole building, is to place the columns every eight feet. Truss carriers (basically headers) are then run from column to column. The trusses are installed on top of the carriers, every four feet.

This four foot truss spacing, allows for 2×4 roof purlins to be placed flat on top of the trusses. These purlins are attached by driving nails through the wide face of the purlin, into the tops of the trusses. It does make for a fairly easy purlin install (other than dimensional lumber typical runs about ¾ of an inch over length, so every purlin must be trimmed), and it gives a big wide surface (3-1/2 inches) to run screws through the steel roofing, into the purlins.

Like any system, there are some downsides – and my opinion is this method has some significant ones, which outweigh the positives.

In comparing to my idea choice of construction, this method requires 50% more holes to be dug. It takes half again more trusses and involves handling about double the number of framing members. Granted, often the framing members are smaller, but handling is still handling.

Structurally, there do exist some issues. The great majority of building failures are from connections – either inadequate, or improperly installed. The fewer connection locations, the less places for a potential error.

The trusses every four feet, columns every eight, results in purlins having to be connected to trusses, trusses to truss carriers, truss carriers to columns. Lost is the direct truss to column connection provided by them being aligned with each other.

In a single truss system, if one truss fails due to extreme loads, the balance of the roof is sucked down behind it. The face-to-face connected double truss system, creates a redundancy where no two adjacent trusses share the identical weak link. This load sharing prevents many would be failures.

And one more thing – I mentioned nailing the steel to the purlins on the 3-1/2” face as being an easy target to hit.  However – what about nailing the 2×4 purlins where they come together over a single truss?  You now have two purlins butting into each other, sharing that 1-1/2” space.  The chances of missing the truss beneath, or splitting either the end of the 2×4 and/or the ¾” space on the truss are….pretty high.  Another connection failure.

And back to the Building Official issue – our company has dozens of clients all across the state of Michigan who have been granted Building Permits and are enjoying their buildings with double trusses and wall columns spaced every 12 feet. Never be able to obtain a permit? Never is a big word, and it just is not the case.