Today the Pole Barn Guru answers questions about calculating the height of a building, Building on and existing foundation, and Spray Foam Insulation.

DEAR POLE BARN GURU: I’m looking for over all height of a building with a 14’ eave?
Thanks. DOUG in PILOT ROCK

DEAR DOUG: The overall height determination starts with a clear understanding of how eave height is to be measured: https://www.hansenpolebuildings.com/2015/02/eave-height-2/.

With this in mind, the rise of the roof can be calculated by multiplying the distance from sidewall building line to the center of the building, in feet and multiplying this by the roof slope. Here is an example for a 36 foot width gabled roof with a 4/12 roof slope:  36′ X 1/2 (half the building width) X 4″ / 12″ = 6 feet. Adding this to the eave height gives an overall height of 20 feet, in this particular example.

DEAR POLE BARN GURU: Can they be built on a poured basement wall from a previous home? PAT in GREENEVILLE

DEAR PAT: As long as the concrete is structurally sound you should be able to utilize dry set column bases (ones designed specifically for post frame construction) to mount columns to the top of the foundation.

DEAR POLE BARN GURU: I have an existing Hansen pole barn 24×24 with a 9ft eave height and full length ridge vent, it has reflective roll insulation between the roof panels and the purlins. How can I further insulate it from Florida heat? I insulated the walls with rigid insulation. Can I add insulation under the existing reflective insulation at the roof? STEVE in ROSELAND 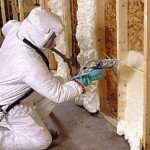 DEAR STEVE: I’d be contacting local installers of closed cell spray foam insulation. You will get close to R-7 per inch of foam (again, must be closed cell) and do not have the ventilation issues posed by using batt insulation between purlins. You will need to block off the eave and ridge vents for this to be an effective solution. 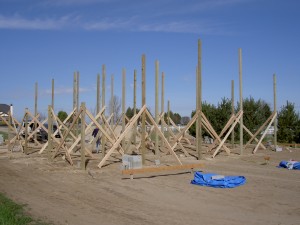