The design upon which most modern spring tape measures are built was patented by Alvin J. Fellows in 1868. But even a better mousetrap doesn’t always catch on immediately. In 1922 Hiram Farrand received another patent and within a few years the Farrand Rapid Rule was being mass produced and was slowly adopted by carpenters.

As a provider of pole (post frame) building kit packages one of the biggest challenges faced by mostly the very same carpenters as those Mr. Farrand dealt with is proper use of the tape measure. While the majority of Americans seemingly can hook one end of a tape measure over a point and measure to another point, when it comes to pole building eave heights these abilities appear to be as remote as the South Pole in the dead of winter. 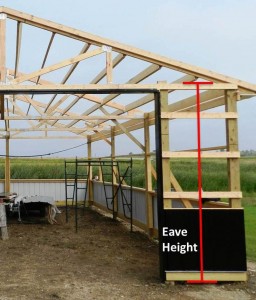 The measure of eave height is indicated no less than at least five times on every set of Hansen Pole Buildings plans, as well as 51 times in the Hansen Pole Buildings Construction Manual, which is provided with the investment into each building kit. Being as the term “eave height” is used so frequently, the errors cannot possibly be due to failure to read and recognize.

(For another good read on the definition of eave height: https://www.hansenpolebuildings.com/blog/2012/03/eave_height/)

Therefore, I have determined (as the “idea” guy), it must be due to faulty tape measures!

Having a “light bulb” moment, I suggested to the Hansen Pole Buildings owners a solution to the problem. The company could have tape measures made with the company logo on them – and ship one to each person as they invest in a new pole building kit.

The clue to successful measuring would be to have the eave height for each building indicated on each tape measure with permanent marker.

Problem solved. (So far the two owners are not quite endorsing my idea however).

Now if I could just figure out the Acme “Hole Kit”