Footers, Building Over Old Pool, and Home Made Glu-Lams

This week the Pole Barn Guru answers questions about need for a “footer,” building over an old pool, and the efficacy or viability of building ones own glulaminated posts.

DEAR POLE BARN GURU: You have most likely answered this question before. I don’t seem to be able to find it.

I am thinking about building a post frame home. Building department says if I put the post into the ground I do not need a footer for the floor slab. We have cold winters where ground may freeze. Will I have a problem with the slab moving? JOHN

DEAR JOHN: Congratulations for considering a post frame home as your solution. They make for wonderful homes (I live in one).

Your Building Department is correct in saying you do not need to have a “footer” for a thickened slab in a post frame building. However it will stand a great possibility of moving without taking some precautions.

Proper site preparation is a key to success – https://www.hansenpolebuildings.com/2011/11/site-preparation/.

If you are going to do radiant in floor heat (strongly recommended) you will need to provide a layer of insulation under your slab. Most jurisdictions have requirements for all homes to meet minimum energy saving requirements, this includes insulating around your building’s perimeter: 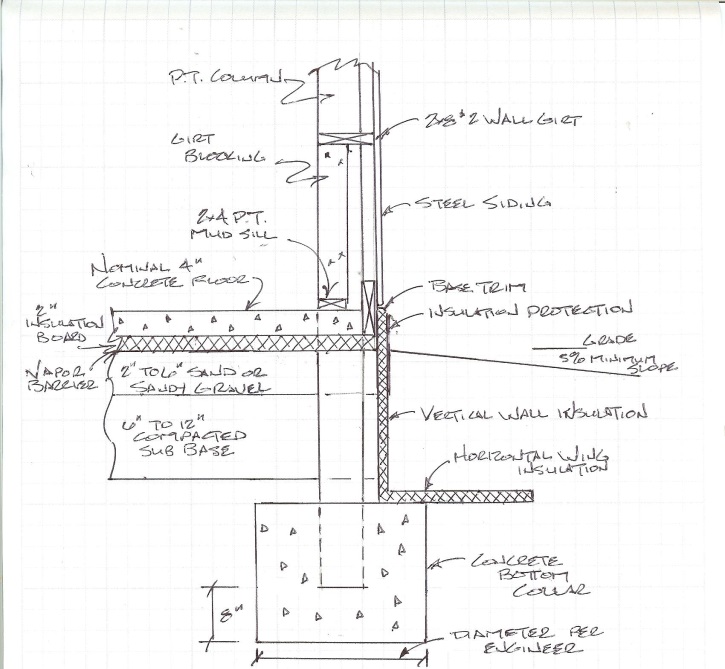 DEAR POLE BARN GURU: I have a unique building situation. I have an in-ground 18′ by 36′ rectangular swimming pool with the shallow end being 14′ long by 18′ wide with a depth of 4 feet, and the deep end 22′ long by 18′ wide with an average depth of 6 feet. I want to drain the pool and then build a structure of 22′ by 40′ to cover the area previously occupied by the pool. I do not want to demolish the pool, unless I have to.

When completed, the new building would be two stories (8′-10′ of it will be below the foundation of my existing house, with a finished basement with a 9′ floor to ceiling height, and a second floor as the main living floor with a cathedral ceiling whose peak will run the 40′ length of the new addition. Will a pole barn structure work for me? If so, will your company draw up the plans and engineer the project so that I can get it approved by my City Building Department? DENNIS in SEASIDE

DEAR DENNIS: I am not a Geotechnical Engineer, but I imagine at the least your Building Department will require the filling of your existing pool to be designed by one. You will want to be discussing with the city. Once it has been adequately filled and compacted your site becomes just like any other one. I will assume your ‘basement’ reference is in comparison to your existing home’s grade. Yes, a pole barn (post frame) structure will work for you. We have a program set up with an independent floor plan expert to take care of your interior spaces: http://www.hansenpolebuildings.com/post-frame-floor-plans/?fbclid=IwAR2ta5IFSxrltv5eAyBVmg-JUsoPfy9hbWtP86svOTPfG1q5pGmfhA7yd5Q and we provide the structural engineering to go with your building. 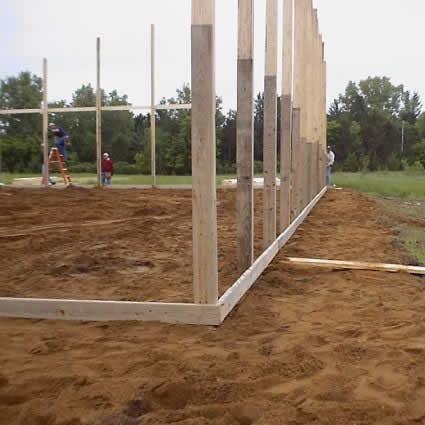 DEAR CHRIS: Ultimately your answer will need to come from whatever engineer you have hired to design your building.

Unless those ground contact treated 2×6 are UC-4B rated, they should not be used in ground to begin with. Here is my take on your idea: https://www.hansenpolebuildings.com/2017/01/making-glulam-columns/

Nail It Up, Call It a Problem 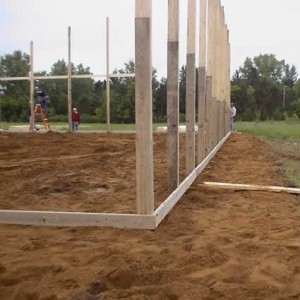 Eric, one of the owners of Hansen Pole Buildings, was contacted by a prefabricated roof truss manufacturer recently. They weren’t interested in selling just trusses; they wanted to provide their nail-laminated posts as well.

Among their selling points were the columns were, “stronger than even the glu-laminated columns”. They Emailed to Eric some nice glossy literature, which Eric forwarded to me, knowing how I love to pick things apart.

The first thing I noticed is, their literature is using values for the #2 Southern Yellow Pine (SYP) 2x6s, which their columns are made from, based upon the 1997 NDS (National Design Specification). However, the strength values for dimensional SYP have been downgraded as of June 1, 2013. This means the values listed in their literature are 25% too high in bending and about 15% in compression!

As manufactured by this company, the #2 SYP is used for the bottom pressure treated portion of the column, and the upper is #2 SPF (Spruce-Pine-Fir). The SPF has an Fb (fiberstress in bending) value of 1138 psi (pounds per square inch) compared to an Fb of 1000 for the 2×6 SYP.

Interestingly, the company DOES only take credit for the section modulus (Sm) in the spliced are as being 2/3 of what three 2×6 unspliced would provide. AS we will soon prove, this 2/3 is being pretty generous to them.

In Woeste’s testing three-ply 2×6 #2 Dense SYP nail laminated posts, were compared in strength to 6×6 #2 SYP solid sawn columns. The moment resisting ability of a wood member is calculated from Fb X CD (duration of load = 1.6 for wind) X CM ( = 0.85 wet service factor for dimensional lumber) X Cr (repetitive member factor for 3 members joined together) X Sm. As the testing was done on lumber which had not been subjected to moisture CM will be disregarded for comparisons.