What to do About a Leaking Cupola

What to do About a Leaking Cupola 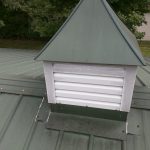 Hansen Pole Buildings has always used prefabricated cupolas manufactured by MWI – I even have one on top of my own house, so they must be good stuff! Only once have I ever gotten feedback from a client to tell me their cupola was leaking. In their particular case, it was because their builder had installed the cupola and its flashing first directly on top of the roof purlins. The builder had then butted the steel roofing and the ridge cap up against the cupola!

I know, it sounds counter intuitive and it was. Most of the time the Law of Gravity says, “water runs down hill”.

One of my readers recently wrote to tell me the cupola on the roof of his Cleary Building leaks every time it rains and he was looking for a fix.

Here was my advice: 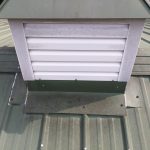 Now I am not your average pole barn owner – and I don’t like exposed caulking. I’d be replacing what is there with a brand new cupola with a universal base. Besides what comes with the cupola kit, you would need a hand full of stitch screws the color of the base and two outside closures to put beneath the downhill edges of the base. Yes, it is going to be an investment, however it will solve the problem and look nice and new.

Assuming you want to fix what is there, here is the mission – find where it is leaking. Requires a hose and someone to stand inside and tell you when the water starts coming through. Begin with the flashings on the downhill edges, run a pretty good stream of water onto them (one at a time) for a minute or so. Even if the leak is along one of them, keep checking along the way, as it could be multiple points. Next do the flashing on the ridge cap sides. Then each side of the cupola individually (letting the water run down from the cupola roof).

If there is a leak, it should have shown up in the hose test. With the leak isolated, you can do a repair with the best silicone caulking money can buy. If one of the edges of the flashing is not sealed to the roof, Emseal AST expanding closures work quite well to fill those gaps. https://www.hansenpolebuildings.com/2016/03/emseal-self-expanding-sealant-tape-closures/

When I was a “newbie” to the pole building industry, pretty much everyone was nailing steel roofing and siding using ring shank nails with a neoprene washer beneath the head. In theory it was all great and wonderful. In reality there were some issues:

No matter how expert the hammer swinger was, there is no way every nail could be driven into exactly the same snugness. Even if the ‘swingee’ could do everything identically from the business end, lumber is organic and varies in density from board-to-board (sometimes even in the same board). Hit a knot? Not good.

This results in some nails being over driven, others under driven. Both situations resulted in leakage. Leaks are bad – building owners somehow have no sense of humor about them.

Swing the hammer and have the head glance off the nail? Those hammer dents in the steel are just not very attractive.

Try to remodel a building where the steel has been nailed on? Good luck having any salvage.

The Hansen Pole Buildings shipping warehouse is an older pole building (built by someone else long ago) with nailed on steel. When we purchased it, the roof had so many leaks it might as well have been a colander!

Consider how a nail enters the wood. It forces the wood fibers down. Watch a screw being driven in – it pulls the wood fibers up. Wood has an inherent “memory” and as those disturbed fibers return to their natural state, they want to push nails out (resulting in leaks) or pull screws in (creating even a tighter seal). We saw evidence of this in the warehouse we purchased, with about 10% of the nails sticking up out of the steel by anywhere from ¼” to a full inch above!

Early in the 1980’s most builders and suppliers moved from nails to screws, which are a superior fastener.

When I owned M & W Building Supply, we switched over to screws in about 1982. When our clients needed erection labor, it was provided by Farmland Structures (owned by Jim Betonte). Jim was astounded when a couple of his crews told him they were driving the screws in…..with hammers!

The only way for Jim to convert them, was he bought each of his crews a screw gun. Once they had used the guns, they were sold on the idea of screws.

What got me set off on this rant was a quote which was forwarded to our office, by a client, from Ameribuilt Buildings, a pole builder based in Waite Park, MN. Under “Ameribuilt Buildings Standard Features” is “Nailed steel roof (galvanized ring shank w/silicone washers) NOT SCREWS!!”

Somehow Ameribuilt must be very proud of using technology from the 1970’s as the actually put “NOT SCREWS” in bold type!

It rather reminds me of the information on the Cleary Buildings website (https://www.clearybuilding.com/feature_PDFs/NAIL_vs_SCREW.pdf) where Cleary says: “We will continue to follow the philosophy that a nailed roof is the best application. The nail is on the rib of the steel and the rib will shed water away from the nail. “

Wonderful in theory Cleary, wish your staff could have been around when we used two cases of ‘super whammy million year’ caulking to seal up all of the leaks from around the nails holding down our steel roof!

Even Morton Buildings has some of the nailing Kool-Aid left around. Now Morton does use nails manufactured by Maze nails (Maze produces a quality part domestically), however a nail is still a nail, even on a Morton Building.

Realistically why would anyone seriously consider nailing steel roofing? I can think of only two reasons – they are far less expensive than screws, and there is a perception the installation process is faster (which means money in the pockets for builders).

Besides the obvious issues with nails mentioned above, there are some strength issues involving diaphragms, when using nails.

In the National Frame Builders Association Post-Frame Building Design Manual in Table 6.1 is “Steel-Clad Roof Diaphragm Assembly Test Data”. Test Assembly Number 4 is the only one which utilized steel fastened with nails, including the nailing of panel-to-panel. The ultimate strength of this assembly was 1930 pounds per foot. Test Assembly Number 13, of the same table” was “our test”. We used thinner steel than the nailed test (30 gauge instead of 29), spaced the roof purlins further apart (28 inches on center instead of 24 inches) and placed rafters at twice the spacing (12 feet instead of six feet). We also used screw fasteners in the flats, instead of nails on the high ribs.

The results might surprise the casual reader – we achieved an ultimate strength of 9600 pounds per foot, or nearly 500% stronger than the test results from nailed steel.

If the leaks don’t prove which is better, the numbers do!

Still convinced nailing steel roofing is “easier”, or some company tries to tell you it’s “better” without any proof? Be sure to order several cases of “lifetime” caulk for the nailheads…because you will eventually need it.