Home >> About The Pole Barn Guru >> The Builder Gene

Children are interesting – especially as they arrive at adulthood and we start to truly recognize what “genes” they have inherited.

My Dad was a builder and his father before him was a builder as well – not much question I had inherited the “builder gene” from them. Our nearly 21 year old daughter Allison has the builder gene as well. When she and her younger brother Brent were in middle school, she did his shop projects – otherwise he never would have gotten through them. My Dad was also mechanical. Me – not so much, Allison certainly not at all – she couldn’t find a fuse or the dipstick on her pickup for love nor money. But my son, Brent – he has the mechanical thing down. 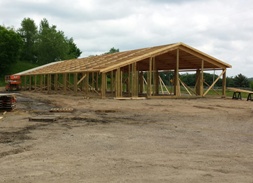 A week ago Saturday we starting constructing a 42’ x 120’ self-storage pole building for one of the Hansen Pole Buildings owners. The building will have five 12’x27’ and five 12’x22’ units for boats. The building site is along Lake Road on the South Dakota side of Lake Traverse. It also has five each 10’x20’ and 10’x15’, as well as two 10’x10’ and three 5’x10’ units for people to put their excess “stuff” in.

My bride suggested we fly our son out from Spokane to have him help. While he has no building experience, at 6’6” he is a weight lifter, is in phenomenal physical condition and is really smart – so it sounded like a good choice to me

He arrived Sunday evening. Monday morning, on the way to the building site, I encouraged Brent to ask questions about everything.

Besides myself, my younger brother Mark, and cousins Kim, Randy, Scott and Steve all worked on construction projects with my Dad and his brothers. My cousin Kim had coined the term for our generation as being the MEI (Momb Enterprises, Inc.) slaves – and proudly posted a plywood sign to the effect at our jobsites. While our elders were superior builders, they were not very good at actually explaining to us the “Why” of doing things – our job was to do as we were instructed and not ask questions about it. Far too often I got myself into trouble with one of the uncles as I was the child who just had to know “why”. On everything. And the answer I got was something akin to “get to work” – to not waste time asking questions.

I didn’t want my son to have the same experience. He may never build anything again in his life, but at least he will learn some things on this project.

Interestingly, I did learn something fairly quickly from watching Brent work the first day – he can drive nails equally well with either hand! I could no more drive a nail left handed, than I could fly to the moon without a space craft! I did recall both Allison and Brent having decided at one point they were going to become more left handed – as they did everything they could left handed for several years when they were younger. How it is kids get ideas in their heads is beyond me, but in Brent’s case, this one worked.

Monday afternoon and yesterday morning we (Brent and I) had to put what seemed like a zillion 1-1/2” joist hanger nails into the rafters for the new building. It gave us time for some learning moments.

Brent will be here for two weeks to help, I will try to share some of what he is learning with the loyal readers of this column.