Why Your Airplane Hangar is Probably Exposure C

I had the joy of growing up “hanging out” (pun intended) at airplane hangars and doing a lot of flying including having my hands on the controls of a Cessna 182 for many hours before I became a teen. One thing for certain about airplane hangars – they are always built with the idea of being able to take off and land the airplanes which are housed inside, somewhere in the general vicinity of the hangar!

Yes, I know this reads like a mission for Captain Obvious.

After all, what would be the use of a hangar if not to be able to fly the plane?

Airplanes do require a certain amount of space to be able to land and the runway better be fairly flat, as well as not obstructed by things like other buildings and trees. Those tall things generally tend to make the life of a pilot miserable.

A Hansen Pole Buildings client recently ordered a new post frame hangar with an Exposure B for wind. This is the short version of the definition of a B exposure:

Wind Exposure B is a site protected from the wind in all four directions, within ¼ mile, by trees, hills or other buildings. This would include building sites in residential neighborhoods and wooded areas.

Whereas, Wind Exposure C is a site where there is open terrain with scattered obstructions having heights generally less than 30 feet high. (Commonly associated with flat open country and grasslands).

If you are curious and want to know all there is to know about Wind Exposure here is some good late night reading: https://www.hansenpolebuildings.com/2012/03/wind-exposure-confusion/.

Being a fairly simple guy, I am scratching my head at this wondering how the plane is going to takeoff through all of this protection. 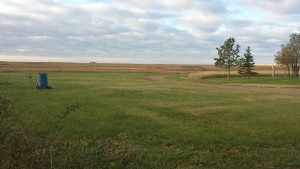 Hansen Pole Buildings’ Managing Partner Eric did a quick Google search of the site and let me know it is in the middle of a field!

In the event you are in need of a new airplane hangar and you are getting quotes from providers which do not specifically indicate on the Exposure C for wind, chances are good you are being quoted for Exposure B. The difference in design strength for resistance to wind loads is roughly 20%.

Do you actually want your several hundred thousand dollar airplane to be parked in a building which is under designed for the actual wind conditions which could be applied to the building?

IndepenDance at the Pole Barn
I ran across the title of this event on the ‘net a...
Why is a Pole Building the Perfect Urban Garage?
This reminds me of, “How do I love thee? Let me co...
Staging Deliveries for DIY Pole Buildings
For those who are considering a Do It Yourself (DI...