Self Storage & Twas the Week Before Brent Landed…..

For regular readers – you read yesterday about my son joining our volunteer construction crew on the 5040 square foot self storage building.

In the week before Brent’s arrival, we experienced some of the fun things which will endear anyone who has ever constructed their own pole building to us. 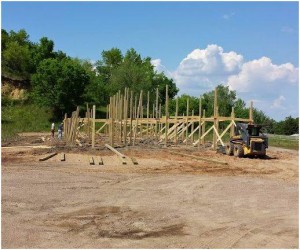 As a typical self storage pole building – this building has posts. Lots of posts. As in 125 of them! And they needed to be five feet in the ground, due to the deep frost depth in this part of the country. Construction had originally been planned for about a month sooner. However it gets cold in Browns Valley, Minnesota in the winter and the frost can be late leaving the ground, this year being one of those. When the frost started coming out, so did the road restrictions, making it impossible to get the needed gravel (and equipment) to the site to give a good base to work from – until the week prior to construction beginning.

This part of the world is farming country, America’s “bread basket” and the preponderance of rain in May and June every year might bring joy to the farmers, but when combined with the absolutely black and thick topsoil it becomes muck.

While digging holes, we got to experience the thrill of deluges of literal Biblical proportions. At moments I thought we might want to be constructing an Ark, as opposed to a building. Building owner Eric’s suggestion of having an acquaintance named Noah assist us was not encouraging at all.

I learned to avoid placing posts into holes before absolutely necessary when it has been pouring buckets of rain. The next day, the 12-18 inches of newly formed muck in the bottom of the holes makes it nearly impossible to get the post back out and situated to where one wants it.

I found it is easier to move the bottom of a post into place when it is suspended in the hole than placed in the bottom. A few quick taps with the five pound persuader on the suspending brace gets the pole to where it needs to be.

Posts do not have to be set absolutely perfectly, but darn close sure helps. For the most part, if the posts are plumb at grade and in a straight line at the base, the tops can be moved by the framing to wherever they need to be (so much more fun to build a pole building than a cabinet or furniture where everything must be exactly precise).

This self storage building has hundreds upon hundreds of boards which need to be cut to length. I set up a cutting table with a chop saw so I could cut multiple members to the same length, without having to individually measure each and every one.

First thing to cut was 2×8 roof purlins for the right side of the building. The lumber provider was generous in sending Select Structural grade Douglas Fir materials, when #2 grade would have worked to carry the load. These 12 foot long boards were nothing short of heavy! So I start to cut and am paying more attention to the outcome than the infeed and I had no sooner grabbed a 14’ board and cut it when realizing I had done an oops. I hate it when I have a case of the stupids like this. Moral – don’t just measure twice and cut once, also look to see if what you are cutting is the right board (or piece of steel, etc.).

Now I have built a couple of pole buildings in my life time. All too like many experienced builders, I am working out of my head, instead of paying attention to the plans. In a typical Hansen Pole Building, double trusses are notched into one side of the columns.

So, with columns every 12’, I deducted 3 inches for the double rafters and allowed another 1/8” off just because I knew in a 120’ long building roofs tend to grow in length. Just a little over half way done with cutting them and I have what my daughter Allison would call a “face-palm” moment.

Long story short – in order to get the rafters to align with the framing for the interior partitions one rafter is notched into each side of the columns, so I had just cut an entire stack of purlins too long by 2-1/2”!! Always easier to make things shorter than to be looking for a green handled board stretcher, but not fun to have to huck all of those heavy boards around again.

Stay tuned in the days to come for more on the story of Mike the Pole Barn building a self storage building.

An Advance Article Preview for The Advertiser
Besides being a semi-regular contributor to Rural ...
Japan and Hansen Pole Buildings
As I keyboard this, it is the seventh anniversary ...
Can You Provide Just Trusses for My New Pole Barn?
Back in my owning a roof truss manufacturing plant...