Over the years I’ve experienced many various clients who have constructed pole building kits as “bonding” experiences.

These have included a couple in their early 80’s, five brothers who built a new shop for their Dad for Father’s Day, and a man and his 14 year old daughter.

We’ve built two pole buildings with our oldest son Jake – one at the house he sold in Tennessee a year ago, and the other for his father-in-law in the Smokey Mountains. Our youngest daughter, Allison, helped us to build the deck across the rear of Jake’s house – as it coincided with her attending Pat Summit’s basketball camp in Knoxville.

At 13 Allison was very tall and impressed Pat Summit and her staff enough to be awarded “Best in Her Age Group”. The award was a piece of the hardwood floor from the University of Tennessee gym where the Lady Volunteers won their most recent championship – and signed by Pat Summit herself!

I coached Allison’s basketball teams for five seasons, and knew she was all heart – nearly enough to make up for her general lack of natural talent. She’d come home from school every day and shoot baskets until she had made 100. She also had a shot blocking knack, however was so kind she’d help the opposing players up off the court after driving them to the floor with a thunderous block.

But I have digressed – our youngest son, Brent is here with us in Browns Valley to assist with the construction of Eric’s new self storage building. Brent, by the way, is called by Allison her “little” brother – even though he stands 6’6” tall (he is younger than her by 17 months).

The first morning was spent working with Eric on the scissor’s lift, pounding a plethora of joist hanger nails through 2×8 Simpson joist hangers into the roof purlins.

As the last section was completed, I went out to take a photo. This pole building is planned with 12 inch enclosed overhangs on all four sides. I am looking at the end of the building closest to where the roof framing had most recently been completed – and noticed the endwall columns progressively leaning in further as the center of the building was approached!

I walked down the length of the building 12 feet and looked across the row of poles…and they were straight…..hmmmmm

It seems a flying gable had inadvertently been created across the front endwall! A flying gable is normally planned by having each end overhanging purlin go past the end rafter or truss slightly longer than the one prior. 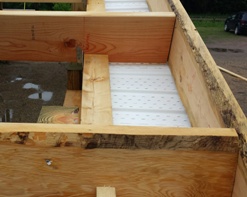 Previously as I was cutting the purlins, I had marked every one of them for “crown up” with a red arrow. For the overhanging end purlins, lines were drawn for the location of the end rafters.

In placing the roof purlins in the end bay more than a few of them were switched end-for-end, so the rafter marks were 12 feet away from where they were intended. This contributed to the demise of the best laid overhang plan.

This created a “teaching moment” for my son – as he had the opportunity to pull out a fair number of nails from the Simpson hangers holding the purlins firmly in the wrong place! Our flying gable took a crash landing.