Pole Barns in the News: Lean-to’s

But working out the policy on making this happen has not been an easy matter. And the board will once again discuss the issue at its June 2 meeting.

A couple of county commissioners have also spoken out in favor of no permitting for such structures, saying they don’t want someone who simply wants a place to store his tractor to have to seek a permit for it.

Commissioner Mike Youngblood said he has an issue with how the measure was pushed by the planning commission, noting that building inspection director Eddie Pritchett and county attorney Mike Pruett weren’t consulted before the matter was brought to the board.

He added that he “wasn’t happy with some of the comments” at a recent planning commission meeting, after listening to the recording of the meeting. He told Douglas that his name was “Mike Youngblood” and he named each commissioner, saying that they are not “that bunch” as he heard on the recording. He told Douglas that he needs to have greater control over the tone of planning commission meetings.

Madison County commissioners heard from building inspection director Eddie Pritchett, who said he doesn’t think eliminating permit requirements is a good thing. He said permits are issued for safety reasons and that not requiring permits could open the door for unsafe structures in the county.”

Personally, I believe the less government is involved in the everyday lives of the individual, the better. However, in this case I agree totally with Director Pritchett and for exactly the reasons he cited.

The Building Code does allow for “pole barns” and other low risk structures such as lean-tos, which would be unlikely to cause injuries or fatalities in the event of a failure to be designed to a lesser set of standards than frequently occupied buildings. 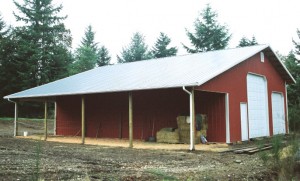 Allowing carports, pole barns and lean-tos to be constructed without a structural plan review is inviting disaster. The tractor storage barn of today, could easily be converted to another use in the future – one which could result in a tragedy due to a building which has been cobbled together. I’ve seen pole barns converted into businesses with hundreds of clients walking through the doors daily, and even as far fetched as a “ski-through” where snow skiers can enter one open side and exit another – via a lift chair. Do you really want to not have these buildings subject to being built to code?

In my humble opinion, every building, regardless of use, yes including lean-tos, should be designed by a registered design professional (architect or engineer) as well as being subjected to a structural plan review prior to a permit to build being issued.

Ask The Pole Barn Guru: Where Can I Buy Concrete B...
Greetings...and WELCOME to my new blog Feature - D...
Pole Barn Lumber: Southern Pine Updates
Southern Pine lumber has been popular since Coloni...
Under-Designed Ag Buildings
Does Anyone Else See How This Could Be a Problem? ...