In the 1980’s one man stood alone when it came to whether City of Portland (basically the same thing as Multnomah County), Oregon homeowners could acquire a Building Permit for a residential accessory building or not.

Now Chuck was a registered Structural Engineer, who took his position very seriously. His expectation was, if a structural permit was going to be approved by him – then the permit applicant, better have his (or her) structural ducks lined up in a perfect row! 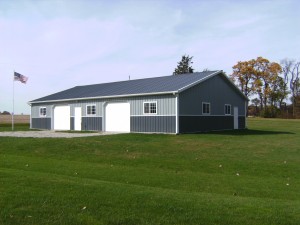 So fearsome was his reputation, many builders (especially those who constructed pole buildings), would put right on their newspaper ads, “We do not build in Multnomah County”.

In a nutshell, he wanted the calculations to verify the embedment of the columns (how deep and what diameter) and for the size, grade, spacing of columns, sidewall girts and roof purlins. Not being an engineer – I asked him for an example, which he provided.

Using his example, we provided hundreds upon hundreds of pole building urban garages across Metro Portland. Portland was laid out with numerous postage stamp sized lots, many only 25 to 35 feet in width. These are especially prevalent in the Northeast area, where many single family homes were built on them after World War One and before the Great Depression. By the 80’s people found they could purchase these 60-70 year old homes for next to nothing and many neighborhoods began to revitalize themselves. One fairly consistent lacking feature of these homes – most of them did not have garages!

Pole buildings were a perfect fit for these homeowners. Many of them were relatively young, and willing to put sweat equity into the fixing up of their (new to them) older homes. Pole buildings are able to be of any dimension, and therefore allowed for the maximization of building footprint to available space. With the only foundation being holes augured into the ground, it was pretty “low tech” compared to the invasiveness of having to excavate for footings and foundations, as would have happened with what many would consider to be more traditional “stick framed”.

And, because construction goes so quick, many urban garages started Friday after work, and were completed over a single weekend!