Pressure preservative treated wood remains a mainstay in modern wood construction. United States’ manufacturing and sales of pressure treated wood has become a multi-billion dollar industry. Even with all of this, there are some skeptics.

Reader DIANE in MORGANTOWN writes in:

“ I want to avoid pressure treated wood. Even the newer and safer versions. Can any alternate material be used? Concrete? Metal? Thank you!”

I personally have full faith in current formulations of pressure preservative treatment chemicals for wood to be both environmentally friendly, safe for myself and my loved ones, and to provide excellent longevity. With this being said everyone should do their own due diligence of any product and develop their own opinions based upon such research.

Posts or columns supporting permanent structures and supported by a concrete or masonry slab or flooring that is in direct contact with the earth shall be of naturally durable or preservative-treated wood.

Exception: Post or columns that are not exposed to the weather are supported by concrete piers or metal pedestals projected at least 1 inch (25mm) above the slab or deck and 8 inches (203 mm) above exposed earth and are separated by an impervious moisture barrier.”

Column holes can therefore be completely concrete filled with wet set brackets placed on top of concrete allowing use of untreated wood columns (as long as column isolated from concrete per Code or weather  protected, it does not have to be preservative treated). https://www.hansenpolebuildings.com/2012/09/concrete-brackets-2/

A splash plank will be required around post frame building base in order to provide a form for any concrete slab poured upon grade and/or to be an anchorage point for siding. Typically this a pressure treated 2×8. In your case, an untreated board of cedar or redwood could be used, as they are somewhat naturally decay resistant. I would recommend either be encased in a Plasti-skirt (https://www.hansenpolebuildings.com/2017/08/plasti-skirt/) as untreated cedar or redwood has a lifespan much shorter than treated wood.

Cordwood Masonry Appears to be a Contradiction in Terms

This article by Randy Edison about cordwood masonry first appeared at www.gfwadvertiser.ca November 24, 2006 and has not been edited

“When Paul Johnson first heard of the construction method from a friend it became a curiosity. 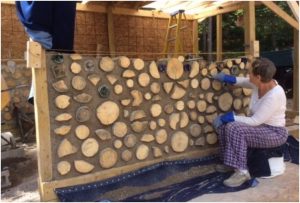 He was curious enough, in fact, to turn it into a handyman project that, despite the challenges, brought a sense of accomplishment.

Cordwood construction consists of placing “log ends” into a wall within a mix of mortar. The method has been used on both sides of the Atlantic for hundreds of years.

Johnson, a Grand Falls-resident, studied a little on the subject and decided to try his hand at it his “home away from home” in Rattling Brook, Green Bay.

“You can only use softwood so I cut some and thought, well, if I didn’t want to do it I can burn the wood anyway,” he told TC Media.

With admittedly more vigour than knowledge, he set about the task, which included the sinking of posts below the frost line to support to the pole barn structure he envisioned. That design called for seven holes.

Anyone who has worked the ground in Newfoundland knows that, in many areas, digging postholes can be a challenge as rocks abound.

Such is the case in in Rattling Brook and before long he realized how labour intensive the task ahead was going to be.

And that was before he and his construction partner and spouse, Josephine, actually began the wall construction and learned just how long the job would take.

“(A neighbour) stopped by one day when I was just at the pole barn structure and said, ‘You know Paul, if you had a few sheets of 3/8 plywood you’d be done by now.’”

There isn’t an ounce of regret over the physical toiling.

In fact, he’s glad the project got his attention because it ended up “filling a gap” for him while he was unable to work due to a medical issue.

He does wish he’d realized what others had.

“Most people start with a kennel, or at least something small,” he joked.

With his wife’s artistic eye adding to the flare and presentation, the couple worked some bottles into the design for effect and plugged away for five months to complete the project.

While his wife brought the artistic flare, Johnson did have a design vision that came to life.

He wanted to incorporate some rustic looking barn wood and found the right touch – in an old building on the Jigg’s Farm property near Botwood.

With permission, he gathered some of the board and worked it into the construction.

Undaunted (but a lot wiser in the ways of cordwood construction) Johnson is even considering another project.

One distinct possibility is a gazebo to act as an art studio for his wife.

It’s fitting that he’d want to put that effort into something for his spouse since the Rattling Brook property was an anniversary gift of hers to him.

After coming to Canada from England in 1967, Johnson had bounced around the country between Ontario and Nova Scotia and Alberta and, of course, Newfoundland.

In fact, he did leave again but decided to come back in 1996 and settled in central Newfoundland.

“I wouldn’t live anywhere else,” he says of his adopted province.

“And it’s been home ever since.”

Cordwood shed and all.”

Although artistically impressive, in my humble opinion, most Building Departments would have a difficult time buying into this as a design solution, unless the cordwood used was a specie of wood which was natural decay resistant, or was pressure preservative treated. In the event you desire to attempt this at home, be sure to have your engineer design the wall columns to limit deflection, else there could be some issues at the column to fill interface which could lead to less than a happy end resultant.