Hansen Pole Buildings’ Designer Rick has been working with a client who has a nose for knowledge – and I thank both of them for sharing information with me, so I can pay it forward. This particular client is weighing the use of Perma Columns against the more traditional design solution for post frame (pole building) foundations – where a pressure preservative treated wood column is embedded into the ground.

As the good folks at Perma Column state on their website:

“Perma-Columns are five foot precast concrete columns that keep wood out of the ground, ensuring your building’s foundation will never rot. They are the first product to combine the economy of post frame construction with the durability of a concrete foundation. Simple installation. No waiting on concrete trucks. No treated wood in the ground.”

Our good client has done his research and found the following article, “Long-Term Durability of Pressure-Treated Wood in a Severe Test Site”, which was published in Advances in Civil Engineering Materials in 2013.

For those who are interested in numerous pages of reading, the article can be found here: https://www.fpl.fs.fed.us/documnts/pdf2013/fpl_2013_lebow001.pdf

Rather like a so-so book I have read a portion of it and then skipped to the ending, the authors of the article conclude: 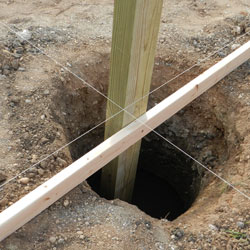 “Long-term post and lumber durability tests provide insight into the expected durability of wood products that have been treated to AWPA standards and properly handled during construction. This review of the durability data from a test site in southern Mississippi indicates that the expected durability of creosote-treated wood is in excess of 50 years, and that of wood treated with pentachlorophenol, ACZA, or CCA exceeds 60 years. No failures have occurred in lumber specimens treated to intermediate or high retentions of pentachlorophenol, ACZA, or CCA formulations. The expected durability of specimens treated with copper naphthenate was more difficult to interpret because of conflicting results between tests with lumber and post specimens. However, the post specimens indicated durability in excess of 60 years, even at retentions substantially below those currently used commercially. Some caution is needed in extrapolating the durability observed in these test specimens to in-service structures, as the specimens are not subjected to the same mechanical loads or potential damage during construction. Conversely, comparison of the results from this site to reports from other locations suggests that these results might underestimate potential durability in more northern climates.”

In lay terms – the probability of any of us who are living adults today seeing a non-abused, properly pressure preservative treated wood column ever rot off, is not impossible, but highly unlikely. 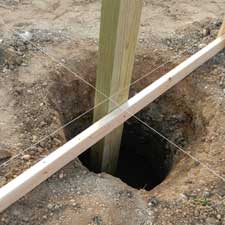 Prior to the EPA (Environmental Protection Agency) dipping its nose into the pressure preservative treating chemical industry in 2002, buying treated wood was pretty darn easy. Chromated Copper Arsenate (CCA) was the treatment of choice for most everything.

CCA was so much cleaner to work with than its most common predecessor, penta (pentachlorophenol), was cost competitive and enjoyed a lengthy lifespan.

I’ve been ranking on the post frame building industry to put the pressure (pun intended) on lumberyards, wholesalers and pressure preservative treatment companies for some time, so it is nice to see another industry (the deck builders) jumping on the wagon for improvements as well.

My most popular rant on pressure treating can be reviewed at: https://www.hansenpolebuildings.com/blog/2012/10/pressure-treated-posts-2/

This recent article by Ted Cushman in the Journal of Light Construction (https://www.jlconline.com/wood/treated-wood-industry-looks-to-toughen-standards_o.aspx?dfpzone=home) lays out the challenges posed by the deck construction industry with pressure preservative treated wood.

Ted also wrote a great article in Professional Deck Builder (https://www.deckmagazine.com/lumber/treated-wood-update_o.aspx) which gives an interesting recent history on the “players” in the pressure preservative chemical industry. This article also has some great explanations as to how different chemicals work to preserve wood.

My hope – the post frame (pole building) industry will organize to put suppliers on notice – we (and our consumers) both want and need products which will withstand the test of time.

Investing in a new pole barn? Then know what it is you’re a buying when it comes to the treatment levels of the columns for your new building. Don’t be satisfied if the vendor says their columns “are treated for in-ground use”. Ask them to specify the treatment level! All treated posts are not the same! Whether building yourself, or buying a “turnkey” building – your hard earned dollars should be spent on something which will indeed last for as long as the rest of the building!

Here are the top three reasons – Money, Availability, and Recycling/Reusing.

Trying to save a few bucks on your pole barn and don’t care about longevity or ease of use, then used utility poles may be the answer. Most people, who are going to invest an average of $50,000 into a new building, prefer to have a design solution which can be relied upon however.

As discussed in my recent articles, most utility poles are replaced due to decay issues. Oil based preservative treatments (like penta or creosote) are affected by time and gravity. As the treatment chemicals wear thin at the ground line, decay begins to occur and the utility company replaces the pole. In an attempt to reuse the poles, the portion which was at the former ground line (the decay zone) should be cutoff and properly disposed of in a landfill. This leaves the remainder of the pole being the portion with little or no treatment chemical remaining.

If one of these poles happens to rot in a new pole barn, the cost to replace it will be more than what was initially “saved”, even if the poles were free. 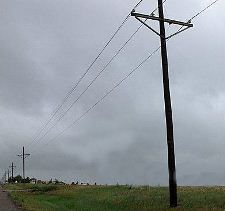 Building a pole building which requires a structural review of the plans? (In my humble opinion, all plans should be so reviewed.) Building officials are probably not going to “buy in” to the use of used utility poles. Why? There is no way to determine if what remains will meet with the minimum code requirements for preservative treatment.

Fully enclosed building? Many will find the odors of oil based chemicals to be an issue, not to mention having the chemicals continuing to leech from the posts. Even the CCA (Chromated Copper Arsenate) treated pole can no longer be used in residential applications due to EPA (Environment Protection Agency) regulations.

Ease of use – used utility poles are round and tapered. In order to place them in a building so dimensional lumber can be properly affixed, the sides of the pole which will be attached to, are best cut to a flat surface. Besides complexity, this also adds the issues of hazardous chemicals being placed into the air, both as fumes and in the sawdust. Dealing with the taper, means the poles will not be set plumb, in relationship to the actual center of the pole, but will instead be leaning outward, so the outside face is vertical. This may be less of an issue, unless an interior finish of some sort is to be added at a later date.

Many utility companies have used poles laying around – they are not easily disposed of, as they should be taken to a landfill and buried as hazardous waste. This makes the utilities all too happy to either give them away, or to sell them at what seems to be a bargain.

And, while I am all for recycling and reusing, this is just one place where it does not make sense from a practical or economic standpoint.