Struggles to Define What a House Should Look Like

With barndominiums, shouses and post frame homes rising in popularity, jurisdictions are struggling to define what a house should look like.

To follow is an article by Arielle Breen in August 13, 2020’s Manistee, Michigan News Advocate detailing their city’s challenges.

“Does the building plan look like a pole barn or a house?

The answer is that it does not matter what it looks like since a new house in Manistee does not have a detailed design guideline to define what a house looks like — or what the city’s ordinance actually means when it refers to a house needing to fit into “the character of its neighborhood.”

But Manistee City Planning Commission may be looking at creating specific standards for the look of new houses built in the city in the future.

Mike Szokola, Manistee County planner, said if a person wants to build a house in the city and meets criteria such as minimum height and setback requirements, then zoning permits can not be declined as the current ordinance reads.

“At no point in time do I get to ask them ‘What’s it made out of’ (or) ‘How many windows does it have,’” Szokola said at the last Manistee City Planning Commission meeting while showing an example of a home proposed on Ninth Street.

He said there are no design standards within the city’s ordinance that would prevent that style of house. 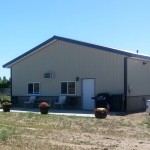 The topic was brought up at the Aug. 6 meeting after Szokola reported he had seen more than one house come through requesting permits in which the house didn’t quite fit with what a typical house in the area might look like.

Members stated that the house resembled a pole barn structure one might see in rural areas outside of the city.

Rob Carson, Manistee County Planning director, said at the meeting that a lot of communities have design guidelines that stipulate aspects such as how many windows a home needs to have and what types of siding are appropriate.

“This is the second building that we’ve received a permit for in less than a year that is going to strike up some controversy in these neighborhoods,” Carson said at the meeting. “When this came in and Mike brought it to me, I was concerned but I said ‘There’s nothing we can do to stop it right now.’ And that’s what the primary issue is.”

While planning commission members said there is a need to have some sort of guideline, they were also hesitant about being strict with appearance requirements in any ordinance they may pursue.

Planning commission member Shelly Memberto said as a property owner she tends to be careful about design.

“I live in probably one of the oldest houses in the city. And I’m sure that the owner, when the house submitted across the street from me which is probably now 80 years old today, they probably hated visually how it looked,” Memberto said. “It didn’t fit in with the character 140 years ago, but maybe it did 60 years after that.

“I don’t know that 20 years from now every house isn’t going to look like this (Ninth Street house example,)” she said.

Carson expressed concern that once approvals for houses go through that are not in character, they could “trigger” more cases as the city has “a whole lot of new visitors.”

“Somebody may say ‘Hey, look there is a pole barn someone let them put up. It’s got a loft in it, it’s separated from the vehicle space. That’s what we want because we’re only here two months of the year,’” Carson said.

He said the commission could find a “happy medium that doesn’t go overboard on regulation but would appease the public and the residents of the city.”

Carson said he would gather several examples of ordinances the commission could consider and discuss at an upcoming meeting that would show the less stringent and more strict options available if the commission wished to proceed with a design guideline ordinance.” 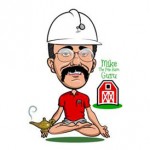 Ultimately, Planning Departments have every right to enforce aesthetic ordinances – as long as they are applied universally to all types of structural systems within a given occupancy classification (such as R-3 residential). What they cannot do is to regulate whether a Code conforming structural system may or may not be used. Should your jurisdiction try to prevent you from constructing a fully engineered post frame home – send me a copy of their written ordinance (not just anecdotal evidence) and I will go wage war for you.