Home >> Pole Barn Questions >> What Fails First in a Fire?

What Fails First in a Fire?

What Fails First in a Fire- the Truss Lumber or the Steel Truss Plates? Part I

We have a client who also happens to be an engineer. He is planning upon a rather goodly sized (64 feet wide by 96 feet long by 22 foot eave) hay storage building and had some rather interesting concerns.

Here is his first one: 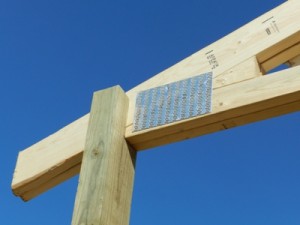 He is concerned about collapse in a fire, which can happen with hay not properly dried.  He has either read or heard pressed metal truss connector plates are one of the first things to fail, in the event of a fire, causing the trusses to fail and bring the building down.

I did enjoy the response from Hansen Pole Buildings Managing Partner Eric, “The whole fire question just seems odd to me. So he is worried about the building not collapsing in the case of a fire but basically knows in the event of a hay fire the building will be worthless regardless? I mean when you have a building in a hay barn it is toast no matter what it is made out of. Get your marshmallows out and watch the blaze because there isn’t any stopping it.

If the worry is more about fire I would think a sprinkler system would be the only worthwhile investment here.”

I took it a little bit further:

From the testing results I have read, it appears the pressed steel connector plates actually help to protect the wood behind and immediately adjacent to the plate. For the curious, here is the link to the test results: https://www.fire.nist.gov/bfrlpubs/fire07/PDF/f07004.pdf.

The best bet is to prevent hay fires from occurring.

High moisture hay stacks can have chemical reactions which build heat. Hay insulates, so the larger the haystack, the less cooling there is to offset the heat.

When the internal temperature of hay rises above 130 degrees F, a chemical reaction begins to produce flammable gas which can ignite if the temperature goes high enough.

Hay fires generally occur within six weeks of baling. Heating occurs in all hay above 15 percent moisture, but generally it peaks at 125 to130 degrees F, within three to seven days, with minimal risk of combustion or forage quality losses. Temperature within a stack then declines to safe levels in the next 15 to 60 days, depending on bale and stack density, ambient temperature and humidity, and rainfall absorbed by the hay. 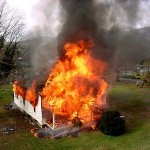 In addition, you should check your hay regularly. If you detect a slight caramel odor or a distinct musty smell, chances are your hay is heating. At this point, checking the moisture is too late, and you’ll need to keep monitoring the hay’s temperature.

What do you do if you suspect your hay is heating?

Come back tomorrow and I will impart sage advice!