Manufacturers and resellers of all steel frame buildings are quick to tout the fire resistance of steel as a reason to not turn to pole (post frame) buildings as a design solution.

Dr. Michael N. is a lecturer in two subject areas at his local university, civil engineering and structural steel design. This is what he had to say in this debate: 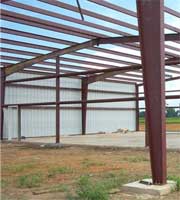 “Basically, steel doesn’t “melt” until the temperature gets to around 1500 degrees Celsius (or, 2730 degrees F, for my US friends). What does happen though, is that at around 720 degrees Celsius (or, 1320 degrees F), the “Young’s Modulus (E)” of structural-steel can drop away fast. “So-What?” I hear you say… Well, with smaller values of E, for given stresses within the steel (where these internal stresses come from the Loads applied), the amount of displacement (or movement) of your steel increases, often dramatically. So, whilst your steel will certainly not melt, it becomes way more “plastic” when heated above 720 degrees Celsius; which is a really easy temperature to reach in a “standard” fire. Whereas large cross-sections of structural timber – so long as they’re not burnt through – will not lose elasticity (anywhere near as near as much) when heated to the same relative temperature as their steel cousins. Of course, with enough heat over enough time, all timber will burn, but, experience and experiments have shown that charring on the surface of timbers can actually provide some insulation (for a little while). The upshot is that, in many situations, a steel structure can be far more dangerous (in terms of instability) after a fire, than a timber structure (under the same loads); hence, why fireman are always very interested in the materials used in the structure. Which is why fire protection of structural steel is a big part of engineering design & construction.”

As a teenager, I worked my 16th summer for my Dad and Uncles, who were framing contractors. The first project I participated with them on was a commercial medical office building complex – two three story buildings centered on a courtyard. Each level had a walkway around the courtyard to allow access to each of the units on the particular floor. The walkways were supported by steel columns. All of the steel columns had to be wrapped with several layers of fire resistant gypsum board, and then the resulting assembly covered with cedar boards for aesthetics. I remember thinking how creative my Dad was in finding a way to hold the gypsum in place – we used wire around the outside!

A simpler design solution would probably have been to utilize solid sawn heavy timers for the columns.

Considering investing in a steel framed building due to the supposed advantages of fire resistance? You might think twice!

One thought on “Steel Frame Buildings vs. Wood”