We receive more and more requests from clients who want their pole building roofs designed to support the weight of solar panels. 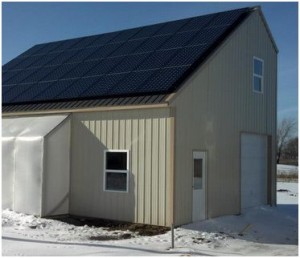 While solar panels are a favorite of those who are trying to “exit the grid” and the “green” folks, they pose never before found threats to fire fighters.

Fire fighters may suffer electrical shocks from panels which cannot typically be shut off. Even when systems have shutoffs, any light may keep panels and their wires energized.

Gaining access to roofs gives firefighters advantages such as venting gases, and the panels get in the way.

Post frame buildings seem to attract more than a proportionate share of fires, from a myriad of reasons. Many have been constructed with little or no Code involvement – no plan checks or inspections, dangerously so in the case of electrical systems.

Adding in the complexities of roof top solar panels just increases the probability of a post frame building fire becoming a total.

Solar energy has grown rapidly over the past decade, primarily in California, Arizona and New Jersey. Risks to fire responders have prompted building codes and firefighter training, but implementation is spotty and often left to individual jurisdictions.

Experts warn firefighters might use less aggressive tactics in buildings with solar panels, especially in instances where the fire poses little risk to human life. If this indeed becomes the case – expect even few fires in pole buildings to result in some or all of the building being saved.

Among the risks are shocks from panel wires which might be sliced when firefighters cut into a roof. Those wires also could come into contact with metal roofing material, causing injuries far from the roof cut, according to studies conducted by Underwriters Laboratories.

Funded by the Department of Homeland Security, those experiments have shown the light emitted by fire equipment can generate enough electricity in the panels so as a firefighter who inadvertently touches an energized wire might not be able to let go, a phenomenon known as “lock on.”

Unable to access roofs, firefighters sometimes switch goals – from actively trying to save a building to preventing flames from spreading to neighboring properties – a practice known as defensive firefighting.

While it sounds as if I am totally against solar panels, my concern is the risks involved with the current technology. If there was a fool-proof automatic shutoff in case of fire or electrical malfunction, I’d be much more inclined to be a proponent.  Or how about some sort of “standard” shut off which is obvious and easy for fire-fighters (or others) to access?  If there is already one available, I’d love to hear more about it.

Considering solar panels on a pole building – weigh some of the possibilities of what would happen to the building in the event of fire. Do due diligence, use common sense for design and use and….be properly insured against losses.