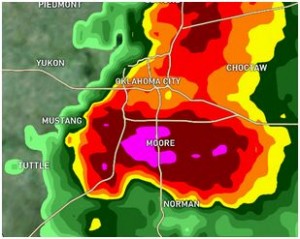 On the afternoon of May 20, 2013, an EF5 tornado, with peak winds estimated at 210 miles per hour (mph), struck Moore, Oklahoma, and adjacent areas, killing 23 and injuring 377 others. The tornado was part of a larger weather system which had produced several other tornadoes over the previous two days. The tornado touched down west of Newcastle, OK staying on the ground for 39 minutes over a 17-mile path, crossing through a heavily populated section of Moore. The tornado was 1.3 miles wide at its peak. Despite the tornado following a roughly similar track to the even deadlier 1999 Bridge Creek-Moore tornado, very few homes and neither of the stricken schools had purpose-built storm shelters

Between 12,000 and 13,000 homes were destroyed or damaged, and 33,000 people were affected. Most areas in the path of the storm suffered catastrophic damage. Entire subdivisions were obliterated, and houses were flattened in a large swath of the city. The majority of a neighborhood just west of the Moore Medical Center was destroyed. Witnesses said the tornado more closely resembled “a giant black wall of destruction” than a typical twister.

The Oklahoma Department of Insurance said the insurance claims for damage would likely be more than $1 billion. Total damage costs have been estimated as high as $2 billion.

How did all of this happen?

Home builders protest the estimated cost of $2,000 to $6,000 for home tornado shelters would make houses unaffordable.  How much is a human life worth? If it is one of my loved ones, a whole bunch more than this.

Some of the fault might be placed upon local government, as well as the Building Departments which provide recommendations for design wind loads for structures. The design wind speed for the Moore area, by Code? 90 mph or roughly 20.736 psf (pounds per square foot). Consider 210 mph is over 107 psf – more than FIVE TIMES the design wind load!!

Anyone wonder why the photos were as astonishing as they were?

Not trying to be confusing….the values we use for wood design are based upon 40% of a 5th percentile figure. As an example, if 100 random pieces of lumber were tested for strength, and the values plotted on a curve, take the 5th lowest value from the bottom, and use 40% of this value. This does afford a certain amount of cushion for safety in designing wood structures.

At the least, I’d recommend increasing the required design wind speed to something in the range of 150 mph (57.6 psf) to 170 mph (74 psf). While this would not eliminate all destruction, it would certainly tend to be better than what exists currently.

In examining a fairly significantly sized full enclosed pole building kit package (40 feet wide by 60 feet long and 14 foot tall), the price increase from 90 to 150 mph design wind speeds was just over 10% (not much more than $1200).

Post frame construction lends itself naturally to being resistant to extreme wind loads. With columns embedded in concrete backfill, there is no weak point at ground level, as found in conventional stick frame construction, or manufactured housing.

With a minimal number of mechanical (nails, etc.) connections, as compared to stud wall buildings, pole buildings run a far lower risk of compromising these crucial joints. Over the years when I have examined “why” buildings fail (either pole buildings or stick framed), it was most often the connections which failed.

Play it safe – play it in a post frame building designed to actually support the types of loads with which it could be hit.