Yesterday I began hacking away at my neighbor’s new pole building under construction. Today, I will dig even deeper (pun intended)!

Leroy and his building crew arrived on Thursday to begin building. My bride and I had to take a detour most of the day to go to Fargo to visit grandchildren and assist with cutting a set of stairs for a deck for our son, so we missed some of “the action”. Early action should have included setting up batter boards and stringlines so as to make sure the building holes ended up in the right locations, and that the building was square and columns were in straight lines.

Surprisingly, there was no evidence these steps were followed, read why this is important: https://www.hansenpolebuildings.com/2014/12/setting-pole-barn-posts/

In case you, dear reader, would like to know, I did venture over late in the day and introduced myself to Leroy and found he had been constructing pole barns for the past 43 years. We had some interesting discussion, mostly me asking polite questions and then quietly enjoying the answers while avoiding making snarky comments. After all, I was there to LEARN. 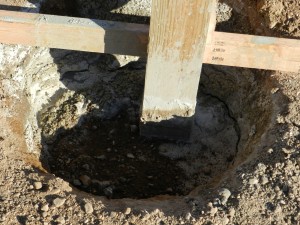 I found it strange – no posts were set on the front endwall of the building until after the balance of the building had been pretty much framed up. When those pole barn holes were dug, I watched as one of the crew members climbed into an overlarge hole to place a post. The hole could not possibly have been three feet deep! So much for frost issues. If you remember from yesterday – the frost depth here is 5 feet. They were only about 2’ short.

I had inquired of Leroy as to what sort of footing they used, thinking they would probably be using concrete cookies. https://www.hansenpolebuildings.com/2012/08/hurl-yourconcrete-cookies/

Well, good news and bad news in the footing department. No cookies (yaay), instead Leroy had his men throwing two bags of non-mixed Sakrete® in the bottom of each hole. Yes, you got that right – dry Sakrete in hopes ground moisture will eventually turn it solid. You can read why this does not work here: https://www.hansenpolebuildings.com/2012/11/concrete/

For those of you who are unfamiliar with the soils of this part of the United States – let me say here in SD is some of the blackest topsoil I have ever experienced. Right here along the lake, it appears to have been created from ancient lake bottom. Great for growing crops, like corn, but not so great for holding up a building. But being generous, we will assume it will support 2000 pounds per square foot. On the building across the street, this means footings of at least 18 inches in diameter. Perfectly formed and properly mixed, if those bags of premix were 80 pound bags, they would have adequately formed a six inch thick footing.  Six inches – 18 inches – it’s close!  (Not).

I asked Leroy what he was doing to keep the posts from lifting out of the ground. His solution is to drive a piece of 3/8 inch diameter rebar through the posts and call it good, although he did admit to having seen more than a few of posts treated this way pulled entirely out of the ground with the rebar bent right over!

Here are a few of my thoughts: https://www.hansenpolebuildings.com/2012/02/concrete-collars/

Come back tomorrow for another segment of the Lake Traverse pole building Saga….