From a recent The Associated Press article:

The state Highway Patrol says a pilot injured his arm when his single engine airplane struck a barn and crashed in a pasture. 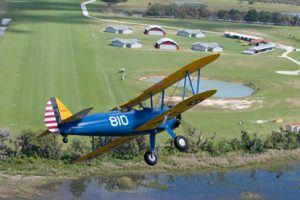 Sixty-year-old Joe Dreyer, of Cardington, was piloting a Cessna 180 aircraft when he lost power attempting to land at his farm. Authorities say he struck a small pole barn before crashing. It happened around 4:30 p.m. Saturday in Westfield Township.

Dreyer was taken to the hospital and treated for an injury and burns to his left arm. He was the sole occupant of the plane.

An investigation is continuing.

I can see how this could happen, and in my humble opinion the pilot got off light as any plane crash one can walk away from is a good one.

As I was researching for this article, I came across this story which was riveting: https://www.cnn.com/interactive/2014/01/world/sole-survivor/

I grew up around small airplanes (https://www.hansenpolebuildings.com/2013/09/hangar-n3407s/), my late father-in-law, Carl, was a farmer with his own airstrip on the property.

Alongside Carl’s airstrip were several pole (post frame) buildings, two of which were hangars and there was also space to work on RC (remote controlled) small scale airplanes in the off season from hop farming.

I’ve seen more than a few of these farm strips which had pole building hangars right up next to the strip:  https://www.hansenpolebuildings.com/commercial-buildings/airplane-hangars/

As it is a private airfield the FAA (Federal Aviation Administration) doesn’t really care about it, as long as you’re not going to interrupt class B or C operations. And honestly as long as you’re not hosting a dozen other aircraft, how are they going to tell the difference between a field and an airstrip? If you want it on a chart or you are near special airspace, you need to contact the FSDO (Flight Standards District Office) and talk to them about it (it’s good to do that anyway). They will send someone out to survey it and talk with you, and hopefully approve it. Considering your own landing strip? If so, it is the local authorities who usually end up being troublesome. Your state/county/city might have laws which apply and you’ll need to find them out on your own.

Once you get approval, carefully consider the location of your new hangar to avoid potential crashes like Mr. Dryer’s.

And when it comes time to design the hangar itself, here are my words of wisdom: https://www.hansenpolebuildings.com/2013/09/hangar-2/.