Hangars are often referred to as being glorified garages for airplanes. As airplanes and their needs for space and maintenance are as varied as their owner’s personalities, there is no “one size fits all”. Hangars can be as simple as a “shade” pole building, to as sophisticated as a complicated environmentally controlled maintenance facility. Since planes are designed to fly, it is important to minimize maintenance time, and maximize their being available for the next flight. 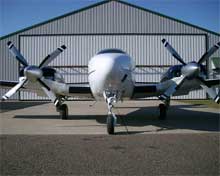 Any major manufacturer of aircraft issues a set of facility and planning criteria for their aircraft. Thought in planning should go to not only aircraft which will currently be housed in the hangar, but also to possible aircraft which may use the building in the future.

Every hangar will include one or more of the following spaces – the hangar “parking” space itself, shop areas, warehousing, office/administration and specialty areas, as well as utilities.

When planning a hangar, actual area needs for the general spaces need to be considered. What type of aircraft will be housed in the hangar? Will maintenance be performed in the hangar? If so, adequate space needs to be allocated for it. Will things be stored or warehoused in the hangar? Is an office or living space needed? How about providing for bodily functions? Bathrooms may need to have more than just a toilet and a sink. Have you considered a shower? If a hangar the public will be accessing, it may need to be handicap accessible. Climate controlling some or all of the space? Provisions will need to be made for HVAC equipment, if so.

Will you want to spend time overnight at the hangar?  Space for a bed, kitchenette complete with fridge and microwave are considerations. How about storage space for provisions?  Although you don’t expect to live there on a full time basis, short term stays are not unusual. We have several clients who came back a year after purchasing their hangars and added dual level living areas at the back of their hangars for those weekends when they wanted to work on their airplanes.  They wanted to save time by not running an hour or more to their home, and the hangar became their weekend “man cave”.

If multiple aircraft will be housed in a hangar, provisions may need to be made for multiple hangar and access doors. Individual planes may need to be segregated by interior walls either for security, or because of fire separation requirements.

Although the original hangar owner may not be a “hands on” person, preparing for the possibility of maintenance needs of future owners increases the value of the building.

Fire protection is an important consideration factor in sizing hangar space. NFPA 409 – Standard for Aircraft Hangars sets out four different groups of hangars based upon size and construction type. As a general rule, the smaller the hangar space, the less expensive fire protection and utility requirements will be.

When planning hangar space, pay close attention to tail heights, as well as the height and width of the hangar door openings. In larger hangars, distance to means of egress (think “person” doors) can come into play.  Multiple doors may be necessary if you end up adding the overnight living space.

With proper planning, pole building hangars can provide generations of functionality, with an affordable investment. It doesn’t hurt to have a few elements of “fun” in it, whether it is the big screen TV in the corner showing your favorite football or baseball game while you work on your plane, or a bed to crash on after a long day of flying. If you are going to build it, make it a building with “enjoyment” appeal.

3 thoughts on “Designing YOUR Aircraft Hangar”