All of the airplane owners have figured out the title already. Those were the call letters for our Dad’s Cessna 182.

When my brother and I were fairly young, our Dad bought a partial interest in a Cessna Skylane. There was nothing like waking up Sunday morning and having Dad ask if we wanted to go out to breakfast…..in Missoula….and we lived in Spokane!

Or the August flights over Schweitzer Basin or Mount Spokane, flying low enough to see if the huckleberries were ripe enough to pick yet.

My all-time favorite trip was the three weeks we spent flying the entire perimeter of the continental United States. Back in 1969, when I was 11, my Dad did all of the takeoffs and landings, but entrusted the balance of the flying to me. While it was probably a big deal, I didn’t think twice about it, as Dad was a good instructor and I was a willing pupil.

The downside of flying….the hangar at Felts Field in Spokane, where the sliding doors were so unwieldy it took much more than a good sized boy to get them open. And, because the door was on the eave side of the building, forget about trying to open the doors after a snow fall. 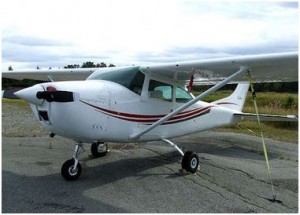 With a brand new sticker price of around $400,000 – if one can afford the plane, they should better be affording a good place to keep it in a protective hangar.

Hangar space rental costs depend upon the size of the hangar, as well as its location. A hangar space which would fit a Skylane would typically be between 1300 and 1600 square feet with either an asphalt or concrete floor would generally run from $350 to $580 a month. These prices are generally without amenities such as water, electricity or heat.

Generally a Cessna 182 has a wingspan of 36 feet, a length of 29 feet and a height of nine foot and four inches. For ease of comfortable access, a 40 foot wide door with at least 10 feet of clear opening height is probably ideal.

I’ve seen narrower doors used, by “hooking” a wing through the opening. Personally, why go through all of the added efforts?

Buildings are Never Too Big - Building Size
Here are the words of Ginnie’s husband - someone w...
Horizontal Steel Siding
The answer is – yes! Back in the late 1960’s in...
When a Concrete Slab Floor Might be Less Expensive...
Post frame (pole) buildings are unique in their ab...