This article by Brian Walker appeared on CDAPress.com Tuesday August 26:

“The cause of Sunday’s fire, which destroyed a restroom and changing area at the Boulder Beach water park at Silverwood Theme Park, remained under investigation on Monday. 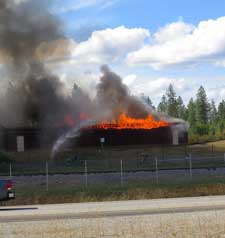 “We don’t know how it started yet,” said Mark Robitaille, Silverwood spokesman.

Robitaille said it appears the fire, which was reported around 2 p.m., started in the male side of the building, which is in the northeast part of Boulder Beach near the Avalanche Mountain family rides.

Robitaille said a state fire marshal continued the investigation on Monday. He said an estimate of the damage hasn’t been determined.

“It destroyed the building,” he said.

There were no injuries. Robitaille said one person was transported to Kootenai Health due to smoke inhalation.

The fire shut down the water park portion of the theme park for about two hours. Four attractions near the fire were closed for the rest of Sunday during the investigation, but re-opened Monday.

Robitaille said the building will be rebuilt, but since the water park is only open for one more week, it’s not an urgent matter.

“We should have the building open for the 2015 opening,” he said.

The amusement park portion of the business was not affected.

An off-duty firefighter assisted Silverwood employees until fire crews from Timberlake and Northern Lakes put out the fire.”

Now most will ask, “Where is Silverwood” and probably also, “Why is this important”?

From 1973 to 1988 along the West side of U.S. Route 95 near Athol, Idaho was a small airstrip operated as the Henley Aerodrome – featuring antique airplanes and stunt flying shows. The Aerodrome became Silverwood Theme Park in 1988 and today is the largest theme and waterpark in the American Northwest.

Entrepreneur Gary Norton loved planes, so he bought the airport, and trains – so he bought a train to go around the property. The theme park became something to run the train through!

Silverwood has made extensive use of pole buildings strategically placed around the park – including (sadly) the building which burned down last weekend. Many of the “thrill” rides such as wooden roller coasters “Timber Terror” and “Tremors”, as well as the Log Flume begin and end in pole buildings! A large picnic area at the Southwest corner of the park, features a series of pole buildings where groups on any size can be entertained out of the weather.

Visiting the Spokane – Coeur d’Alene area from May through September (or at the Halloween season when it becomes “Scarywood”)? Take a day to enjoy Gary’s dream – and don’t forget to check out the pole buildings! 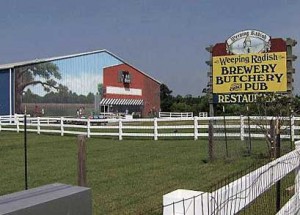 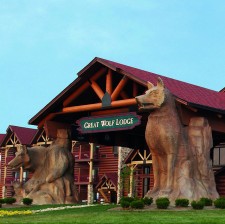