Yes, the title looks to be a simple math equation. The problem with math equations is, not very many people can actually do them – at least not when they fly a desk at the local lumber dealer.

Earlier this year, they quoted a pole barn kit package to one of our clients – 60 feet wide by 96 feet long with a 16 foot eave height. Their price was a lot lower than what one of our Hansen Pole Buildings Designers had arrived at. The client forwarded to us the quote from the local lumber supplier so we could do a comparison. 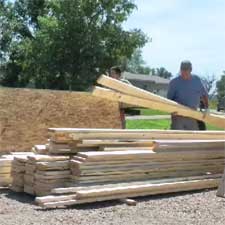 XYZ Lumberyard’s design solution was to place a column every 10 feet with single trusses five foot on center in between the columns on “truss carriers” (basically headers). I put the same information into our state-of-the-art post frame design software and came up with sidewall columns as 6×8 Southern Pine, stressed to 60.5% of capacity.

Interestingly XYZ Lumberyard was counting on 5×5 columns to carry the loads. The 6×8 calculated by our design program happens to be 339% stronger against bending than a 5×5.

The end result, at the building’s design wind load of 90 mph (miles per hour), the XYZ building’s columns would have been overstressed by 205%!! Effectively they were designed for a 62 mph wind speed.

This building was designed using the 2009 IBC (International Building Code), where the absolute minimum design wind speed anywhere in the United States is 85 mph. There is no way the XYZ Lumberyard building will meet Code and no RDP (Registered Design Professional – engineer or architect) worth his or her salt would ever put their seal on the plans.

When it comes down to it, the XYZ design (which frankly was nothing more than a list of pieces) is downright criminal – on the basis of the under designed columns alone.

Truss carriers, XYZ Lumberyard proposed two 2×12 Southern Pine as carriers. Luckily, the roof could very well collapse before the 5×5 columns, as the carriers are overstressed by 167%. Instead of being able to carry the 20 psf (pounds per square foot) roof load they should be able to handle, these headers would have been overstressed at just over one-half of the design load.

It would have been a race to see which happen to take the building down first – the wind or the snow!

As I have said more than once, when one sells on price alone, there is always someone else willing to sacrifice quality to get to a lower price.

Or, perhaps ignorance is bliss and they are very, very happy!