There are some instances where either an L or a T shaped building is the design solution of choice. In some cases it is due to the shape of the property being built upon. Other times it is a result of ideal materials flow either for storage, manufacturing or a combination of the two. It could also be for aesthetic reasons – to create a particular look or feel.

Factors which will influence the structural solution are many, and can include a combination of the following:

So, with all of the above in mind, what are the possible solutions? 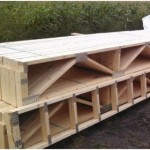 Have an interesting building in mind which may pose structural challenges with other building systems? If so, then a post frame building might be the design solution of choice.