Home >> Dancing with the Stars

Tag Archives: Dancing with the Stars

Dancing With the Posts

Reality television watchers have suffered through 384 episodes of the ABC networks, Dancing with the Stars hosted by Tom Bergeron since 2005. On occasion, it seems some of our clients (or much more often their builders) have done some posts (as opposed to pole) dancing when placing columns for their new building. A certain amount of randomization can be accommodated, as found in this real life scenario:

Our client contacted his Hansen Pole Buildings’ Designer Rick recently, with this information:

“(name withheld) has a question about what to do with the bottoms of his posts being off and how it will affect his roof purlins.

He sent this diagram showing how his posts are off: 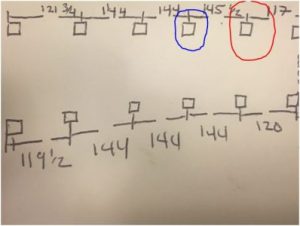 Red circle is 3 inches off

Blue circle is 1 ½ inches off

The question is, does he just set the tops of his columns where they are supposed to be, or does he add a 2×6 to the side of one post?”

In the most typical (as it allows for least cost, fewest holes to be dug and more long term design flexibility) Hansen Pole Buildings construction, double trusses are notched into the sidewall columns and 2x purlins are joist hung on edge between them. For ease of construction and builder sanity, it is ideal for the purlins in each bay to be able to be cut to the same length.

There is a solution, which I passed along:

“Construction Tolerances Standard for Post-Frame Buildings” allows for columns to be 1% out of plumb, which on a 16′ eave would be 1.92″.

He certainly wants to have trusses placed on columns so as to be able to cut all of the purlins to the same length in each bay.

Working from bottom of page up –

The posts will easily flex this far, so it shouldn’t be a huge issue.

This is just one of many reasons why post frame building roofs should be framed (as well as sheathed) prior to any wall framing being done. In the event the walls would have been framed prior to this, solving the challenge would have proven to be difficult, at best.

Thankfully, we have a very astute client who contacted our Technical Support Department for assistance as soon as they were aware of something gone awry.