Our The Wizard of Oz heroine Dorothy (played by Judy Garland) never utters these words in the movie, although many of us believe she did.

The movie it does come from is 1980’s Airplane! where Johnny Henshaw-Jacobs (actor Stephen Stucker) shouts it out while tangling himself in phone cords. I have to confess, when I watched the movie, I missed the entire twisted phone cord thing. Stucker was known for his portrayals of bizarre, larger-than-life characters in a career shortened by his dead from AIDS related complications at 38.

Tuesday, June 21, 2016 had the residents of Mott, North Dakota shouting for Auntie Em as well. 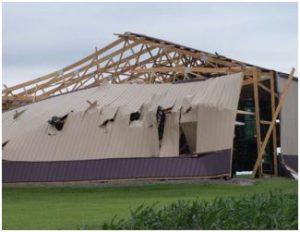 John Paul Martin, warning coordinator and meteorologist for the Bismarck-based National Weather Service, said he classified the tornado on the high end of the EF1 scale, which measures tornado severity on a scale of zero through five.

He said the wind speed of 105 mph alone is damaging, but gains its power and destructive potency from spinning within such a tight area.

Martin said North Dakota normally experiences its tornado season over a six-week window up until August, but such incidents have occurred as early as March and as late as November here.

Rob Larson, a Hettinger County commissioner, said a portion of his pole barn’s roof was blown off by the high winds.

My guess is commissioner Larson’s roof was torn off due to a combination of one or more factors:

Under designed (not an engineered building);

Or roof steel nailed on instead of screwed.

I’ve discussed the ability of post frame (pole) buildings to withstand tornado forces in the past: https://www.hansenpolebuildings.com/2011/06/tornado-proof-pole-buildings-can-limit-damage/

The real challenge is getting clients in tornado prone areas to increase the design wind speeds of their buildings. It is weighing risk/reward – the extra dollars spent on adequate design upfront, is nearly always going to be less than what is not covered by insurance in the event of a catastrophic event.

Not to mention the heartache saved from having to rebuild.