What every post-frame builder should know about laminated columns

The single most important element to a building’s foundation is its columns. They’re the legs that hold the building upright. As post frame has evolved, it’s only natural that methods to improve the strength of those legs would be part of its evolution.

For a comprehensive explanation of laminated columns, the second edition of the NFBA Post Frame Building Design Manual contains a chapter by David R. Bohnhoff, Ph.D., University of Wisconsin-Madison. Bohnhoff has been breaking columns in the name of science since the 1980s. In fact, he got the Ph.D. behind his name after writing his doctoral thesis on laminated columns, which led to the standards for design and manufacturing of mechanically laminated columns.

Frame Building News offers a more generalized explanation here, relying on NFBA members who have embraced the technology in manufacturing, along with other industry insiders.

There are many ways to laminate columns, but the industry keeps them confined into two basic categories: mechanical fastened (mechlam) and glue laminated (glulam). Mechlams utilize nails (a popular type of mechlam called nail-lam) and/or other mechanical fastener components (screws, bolts, and/or metal plates) while, as the name implies, glulam utilizes glue or a glue-like adhesive.

Bohnhoff’s chapter 8 clearly defines each and breaks down all the variations of mechlam. Because nail-lam and hybrid versions of nail-lam (including the use of both nails and glue) are the most recognized mechlam products in use today, this article makes use of the commonly used term “nail-lam.”

Arguments rage over which is best, but properly manufactured, both nail-lam and glulam trump solid-sawn timber in certified testing labs for consistency of strength, straightness, and uniformity of preservative treatment.

A glulam typically has good bending strength regardless of which column face is loaded, so it has advantages in applications in which the column does not have lateral support like that provided by wall girts. Such is the case with many interior columns and columns supporting the open side of a building. Nail-lam columns can be used in such applications, but typically need additional bracing such as faceplates to prevent buckling or bending around their weak axis.

The environmental and economical advantages of laminated columns were addressed in an article, “Engineered Wood Products STRETCH Post-Frame Possibilities” by Robert Clark, APA, Engineered Wood Association, which [at the time of publication was] housed on the NFBA website. “Engineered wood posts can use smaller diameter trees harvested from a managed forest dried to a low moisture content,” he wrote. “These dimensionally stable products resist deformations such as warping and twisting. And, because of the dispersal of natural growth characteristics such as knots and wane, they exhibit superior strength over solid-sawn posts.”

Just as today’s solid-sawn timbers, laminated columns are treated for preservation to endure the ravages of natural deterioration. While some manufacturers treat the entire finished post, many manufacturers treat the individual laminations prior to gluing or nailing. In this method, typically only the lower section of the post that will be installed in the ground is preservative-treated, which can be cost-effective and provide increased chemical coverage area at the interior of the post.

If you are considering the switch from solids to laminates, or you are questioning your choice of lamination, Dale Schiferl of Timber Technologies, Colfax, Wisconsin cautions: “Not all laminated columns are created equal.

“I have seen about a dozen different ways to ‘laminate’ a column in the past 20 years,” he said. “Everything from truss plates, to nails, to finger joints, to butt joints, to construction adhesive with nails, to gusset plates, to screws, to wire rivets, to bolts, and totally glue laminated. I have also seen a wide array of lumber utilized, from the highest grade of MSR and Select Structural lumber to the lowest grade and species of #2. Unlike other structural wood components, column manufacturing is like the Wild West, standards are not enforced. Basically everybody does what works best or cheapest for them.”

A lot of engineering goes into the proper design of laminated columns, Schiferl went on to note. “It should be important that specifiers and builders understand there are ‘standards’ to how columns are built up, be it nails or glue, and they ask for some verification that the products they are using follow the standards. The standards were established through testing by smart people like Dave Bohnhoff and Harvey Manbeck and through efforts of the NFBA. It does not make it OK to build up a column however one chooses just because the standards are not enforced,” he said.

Mike Burkholder, P.E., Ohio Timberland Products (OTP), Stryker, Ohio, echoes that sentiment. His company has been making nail-laminated columns for more than 20 years. Although he explained that, “there had been people nailing boards together for years,” Ohio Timberland Products began testing at Virginia State University in 1994 in the lab of Dr. Frank Woeste. By then, Bohnhoff was testing nail-lam and eventually created what Burkholder calls the “Bible” or “Genesis” of standards for the industry, but as far as developing its own production standards, OTP blazed its trail through the Woeste lab.

The price of laminated columns is one that arises on a daily basis for laminated column manufacturers like Elmer Sensenig, Richland Laminated Columns, Greenwich, Ohio.is articleblished in the January 2021 edition of F

“Laminated columns are very comparable [to solid-sawn columns],” he tells his customers. “For 20′ and longer, they’re actually less costly than a 6″ x 6″. The shorter you go, 14′ to 16′, the laminated columns are a little bit more.” Because builders typically need a combination of sizes, Sensenig stressed, “price is normally not an issue because it averages out.” 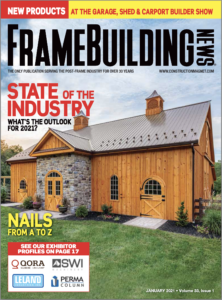 This article was published in the January 2021 edition of Frame Building News.