Fear of properly pressure preservative treated wood decaying prematurely has been a continuing concern amongst potential post frame building owners. Key to this is “properly” and at issue how pressure treated wood is labeled and sold at the retail level. Canada uses AWPA’s (American Wood Protection Association) Use Category system where UC-4 tags say “Ground Contact” without clearly indicating to purchasers UC-4A (prevalently in stock at lumberyards and big boxes) as being inadequate for structural in ground use.

I have been shouting out in regards to this for years, with no noticeable results. https://www.hansenpolebuildings.com/2014/05/building-code-3/

The following article by Don Wall appeared in the Daily Commercial News of November 15, 2021 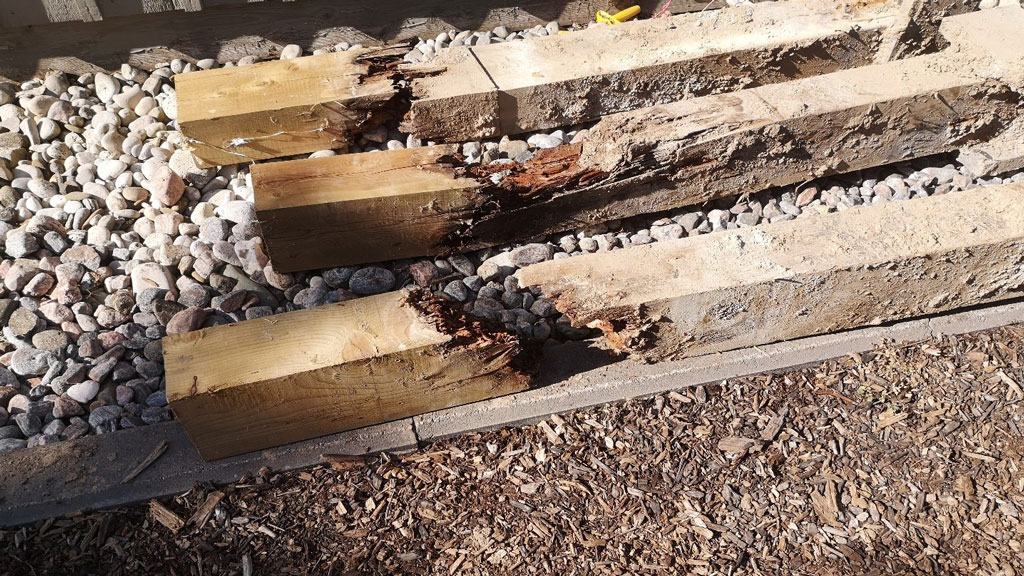 Reaction has been swift and stakeholders have swung into action after concerns were raised by former Canadian Farm Builders Association (CFBA) president Gary van Bolderen and others that some types of pressure-treated wood manufactured after 2003 are prematurely rotting in the ground.

In July van Bolderen, now retired as owner of Dutch Masters Construction of Barrie, Ont., received word from a former client that a pole frame building his firm had constructed just 12 years ago was shifting. It was soon determined that three six-inch-by-eight-inch pressure-treated posts, installed to support the building’s roof truss system, had rotted completely.

Since then, van Bolderen and fellow former CFBA president Will Teron, a building engineer who has credentials as a contributor to the National Building Code, have spent hundreds of hours researching the evolution of pressure-treated wood, even visiting a number of lumber yards to determine how well suppliers understood the proper application of the half-dozen or so types of pressure-treated wood that are available.

As a result of their persistence, there was an online call held Nov. 2 involving executives and experts from the Wood Preservation Council (WPC), members of a newly formed CFBA task force and van Bolderen and Teron. Action plans were hatched by both the WPC and the CFBA task force.

Van Bolderen believes the cases he has found in his initial inquiries could be “the tip of the iceberg.”

“As a builder, we don’t know how widespread the actual issue is or how many failures there are going to be, but the problem is, the confidence is gone,” said Brian Brubacher, co-chair with Wayne Blenkhorn of the CFBA task force. “I need to know what I’m buying when I go to my local lumber yard.”

Blenkhorn commented, “I think we have to be careful not to create just general panic…We don’t want everybody to go and be drilling holes in their posts next week.”

The parties have determined the issue stems from a 2003 decision to withdraw certain treatments of pressure-treated products because of fears they caused cancer. When lumber yards stopped stocking that type of wood there was little education on the part of the WPC, the CBFA, manufacturers or distributors to ensure farm builders or other users understood the new set of options and what products were rigorous enough to withstand below-ground use in a commercial building.

That education deficit has continued to today, the stakeholders agree.

Further complicating matters is the categorization of the wood. Teron explained among several standards there are two commercial standards, 4.1 and 4.2, for low-decay and high-decay environments. The WPC is working with the Canadian Standards Association (CSA) to better define those terms, but the residential application has a confusingly similar designation, 4.1 D.

Van Bolderen said he had no complaints of rotting in 50 years until July, with post-2003 wood failing.

“There’s nothing wrong with pole frame as long as it’s the right product. I think there’s a real disconnect between the producer, the retailers, the engineers and the builders about what is the right product,” he said.

“I was absolutely shocked that the posts were deteriorating completely.”

After being alerted to the barn post failures, the WPC developed an initial communication document for CFBA members that defined the different use categories for barn posts and provided an overview on the governing standard, which is CSA 080 for wood preservation.

The WPC will undertake education and outreach that will include a new publication outlining the differences between residential and commercial or industrial pressure treated products and a list of outlets where the proper posts can be obtained.

There will also be webinars held in conjunction with the Canadian Wood Council, and third-party agencies will be consulted, said WPC executive director Natalie Tarini.

The WPC has “recognized that there is a need for education on the various applications and specifications that exist in Canada for preserved wood barn posts,” said Tarini.

“It is important to note that this is a specification/application issue and not a product issue.”

Meanwhile the CFBA task force is preparing an immediate survey for its members to identify other reported failures and other experiences; and it is tracking the changes in treatments over the past 20 years including what supplies are currently being stocked and delivered.

“Clearly our objective is an early advisory to our members of a reported concern that PT posts as used may not be living up to expectation,” said Blenkhorn. “At the same time to establish which products can be manufactured and at what cost to meet this needed life expectancy.

“We feel that we need to send a notice to all the builders now that if you have immediate plans for framing construction, please, please address this with your engineers.”

Teron noted with approval that the WPC is involving technical members of its standards committee and the WPC president.

“We had a really good, frank, direct discussion,” said Teron. “No-one’s pointing fingers. Everyone’s saying we need to move this forward. We need to improve the education so we have an understanding and everyone’s using the effective parts.”

Pole Building Full Hip Roof
Back in the late 1970’s I was jack-of-most trades ...
Pressure Treated Lumber
Preserving Wood Columns Beyond Code Requirements ...
Hansen Pole Buildings is Number One
We Are Number One  Hopefully you can survive th...