Why Building Prices Won’t Go Down

Why Building Prices Will Not Go Down

Flashing back to 35 years or so ago, I bought my first computer.

I’ll never forget it– it was an clunky Kaypro with a tiny, orange, monochromatic monitor, and a single floppy disk drive. It had 640 kilobytes of RAM, and no hard disk.

I loved it. With this computer I learned how to program, how to navigate a command-line interface, how to design algorithms, and how to solve constant problems… because it was ridiculously buggy and would break down all too frequently.

It was also painfully slow. Boot-up processes could easily take an hour, from when I flipped power switch on, to a ‘DOS prompt’ appearing.

Sometimes I think my computer was a great metaphor for our global economy. Turning it off is nothing; you flip a switch and power goes off. But starting it back up again takes a long time. And this process isn’t so smooth– sometimes it crashes during bootup.

Last March when this Great Plague was upon us, nearly every industry, in nearly every country, practically shut down.

And many businesses went bust, never to return.

Eighteen months later businesses have largely reopened. But like my old computer, this reboot process has been riddled with critical errors and system failures.

For example, right now there are countless businesses in industries from retail to manufacturing experiencing severe labor shortages. Supply chains everywhere are breaking down, resulting in product shortages and major transportation bottlenecks.

End result of this dumpster fire is prices are soaring. And I wanted to spend some time today dot connecting to help explain some of these important trends.

But there were other companies going bust most people have probably never heard of. They were in more mundane, less sexy industries… like corrugated paper and wood pulp.

Yet while their demise was hardly noticed, it turns out they would have a significant impact on our global economy.

Global shipping demand surged last year in ways never seen before. Suddenly, instead of efficient supply chains shipping goods to large marketplaces (like retail and grocery stores), consumers wanted everything delivered to them.

While total shipping volume  was largely unchanged (or even less) than previous years, the number of individual shipments increased dramatically.

In other words, instead of a single large shipment to a store or supermarket, companies were making thousands of tiny shipments to individual consumers.

And prices for all of these materials has spiked.

It’s a similar trend with cardboard and corrugated paper. And these price increases aren’t simply due to high demand either.

Supply has fallen. Last March when a number of wood pulp producers went out of business, no one noticed and no one cared. But it turned out more than 10% of all North American paper capacity vanished, practically overnight, just before demand started to surge.

And this capacity cannot be simply turned on again with a flip of a switch. It takes a lot of effort to resurrect a bankrupt factory, to re-hire and re-train workers. (We’ll get to worker issues in a moment.)

It’s a similar trend worldwide– foreign factories have closed, and those remaining open are struggling to retain workers and operate under strict COVID protocols. Manufacturing efficiency is way down as a result, so they’re not producing enough supply to keep up with demand.

There are plenty enough ships; in fact, total global capacity in terms of TEUs, or 20-foot Equivalent Units, is slightly higher than pre-pandemic.

But a range of factors, including COVID rules and union regulations, means there’s a shortage of maritime crew to operate vessels. There’s also a shortage of dockworkers, truck drivers, forklift operators, etc. at ports.

This is especially true in California, whose regulatory environment makes port operations extremely difficult and inefficient.

Yet sadly, California’s ports are our busiest and most important country; most sea freight from China is offloaded at either Port of Long Beach or Port of Los Angeles, so bottlenecks there cause a major ripple effect nationwide.

Right now there is a backlog of literally hundreds of thousands of ships waiting to unload their cargo in southern California.

This makes California’s COVID policies especially important as whatever Gavin Newsome decides has a huge impact on our national economy.

Labor is obviously another major issue in this messy economic reboot.

Thanks to a steady digest of mass media Covid hysteria, there are still plenty of people who are terrified to leave their homes and go to work.

Moreover, there are so many people who got used to being home now they only want a job where they can work from home.

This is a major problem for businesses… and why it’s so hard for restaurant companies, fast food joints, retail shops, factories, etc. to find workers. People would rather stay home.

Our government hasn’t exactly been helpful in this department when they were paying outsized unemployment benefits to encourage everyone to stay home. This effect is lingering.

There’s another trend at work here, though.

For several years, politicians have been fighting hard to bring United States’ manufacturing jobs back.

It turns out no one really wanted those jobs to begin with.

Younger people in particular don’t have as much interest in those sorts of traditional jobs; they’d rather be ‘influencers’ and make their money posting posterior selfies and snapshots of their contrived lifestyle.

This was already becoming an issue prior to COVID; large companies– especially those in industries considered unappealing to Gen Z– were complaining how difficult it was to hire, train, and retain young workers. Now it’s borderline impossible.

Retail companies lucky enough to find employees are forced to misallocate those scarce resources to do unproductive tasks, like checking everyone’s ‘papers’ when customers walk through their door.

And then, of course, if a business has been able to navigate all these crazy obstacles, someone is now forcing you to fire any worker who hasn’t been jabbed.

Adding to this is the Federal Reserve’s monetary blowout. They’ve printed trillions of dollars over 18 months to ‘support our economy’. Yet even though our unemployment rate is down to 4.8%, they’re STILL printing at least $120 billion per month in new money. 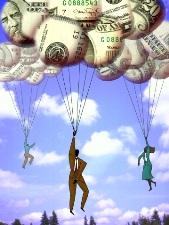 All this new money has helped fuel giant asset bubbles in stocks, bonds, property, and commodities. Energy prices in particular have risen sharply, and this tends to cause all other prices to rise.

Results in this insanity – inflation. Lots of it.

Problem is most of these trends are not going away anytime soon. The Fed may start to taper its money printing. But they have very little room to raise interest rates meaningfully to combat inflation.

Plus labor issues, government policy, shipping, manufacturing shortages, etc. are going to last for a while.

In fact, you’d think a correct government policy right now would be to create incentives for people to work, to create new businesses, and to invest in new technology automating and cleaning up bottlenecks.

At a minimum you’d think they’d stay away and let capitalism do its job.

After all, free market competition is a great tool to fix any economic woes, especially inefficiencies and resource misallocation.

Yet all these proposed policies are anti-competitive and anti-market. They want to create DISINCENTIVES to form businesses and make investments.

It’s exactly opposite of what they should be doing.

2 thoughts on “Why Building Prices Won’t Go Down”