Home >> Uncategorized >> When Concrete Contractors Try to Act Like Engineers

“I want to build a woodworking shop next to my driveway that drops off sharply. I don’t have the space to add fill and slope away as it would put me over the setback on the neighbor’s property line. Local concrete contractor suggested a pole barn style would work best. He suggested I sink posts at the lower grade level 4′ deep at 4′ intervals and then add tongue and groove boards to essentially create a box that I could then backfill with gravel/sand compacting in 4″ lifts. Once that was done and the building was up then I could pour a slab on top of that inside the building. I estimate the grade difference to be roughly 4′ from the driveway to the lowest point where the back wall of the building would be. My building size would be 24′ long and 22′ wide and I want an upper gable room for storage. I would like to be able to stand up inside the “attic”. What do you think of this proposal? To have foundations and poured walls put in would put me way out of my budget.” 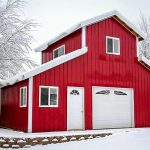 This is why concrete contractors are not allowed to engineer buildings (unless they have actually gone to school, passed their boards and gotten registered). As suggested, a large load is going to be placed upon your building’s columns along this wall, resulting possibly in larger columns, greater embedment depth and more concrete around columns. Throw in what you will invest in two sets of four foot high UC-4B pressure preservative treated tongue and groove lumber and you are talking some serious money.

I am always into looking for simple and affordable solutions. To me, building a concrete block retaining wall along my property line would seemingly be an excellent alternative and would not involve having to pay an engineer to design it. You could then bring in compactable fill to get to level and happily build away. 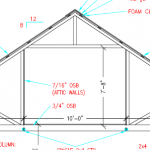 As far as your attic “storage” idea, be wary. By Building Code, light storage areas need to be designed for a 125 psf (pounds per square foot) live load. Even on a 22 foot truss span, these trusses are going to be expensive. Now you could designate this as a ‘bonus room’ and provided your Building Department buys into it, you could have a much lower live load (as little as 30 psf). You would need to remain mindful of what you were actually placing in this area, so as not to overload it and cause an unintended failure.

You will also have to deal with access. While pull down stairs are convenient they provide a very limited opening to get things into this bonus room space. Permanent stairs must be at least three feet in width and meet maximum rise and minimum run standards as well as headroom and clear space at top and bottom of run considerations. When all is said and done, they would chew up a lot of your woodworking space.

When a Concrete Slab Floor Might be Less Expensive...
Post frame (pole) buildings are unique in their ab...
Where is the Top of the Concrete Slab?
This is not like Where’s Waldo?, or Where in the W...
Lumber for Lunch; Why Horses Chew Wood
Hansen Buildings Designer Randy had a client conce...

One thought on “When Concrete Contractors Try to Act Like Engineers”